You have permission to edit this article.
Edit
Home
News
Sports
Opinion
Obituaries
Multimedia
Classifieds
Jobs
Archives
e-Edition
Contact Us
Share This
1 of 2 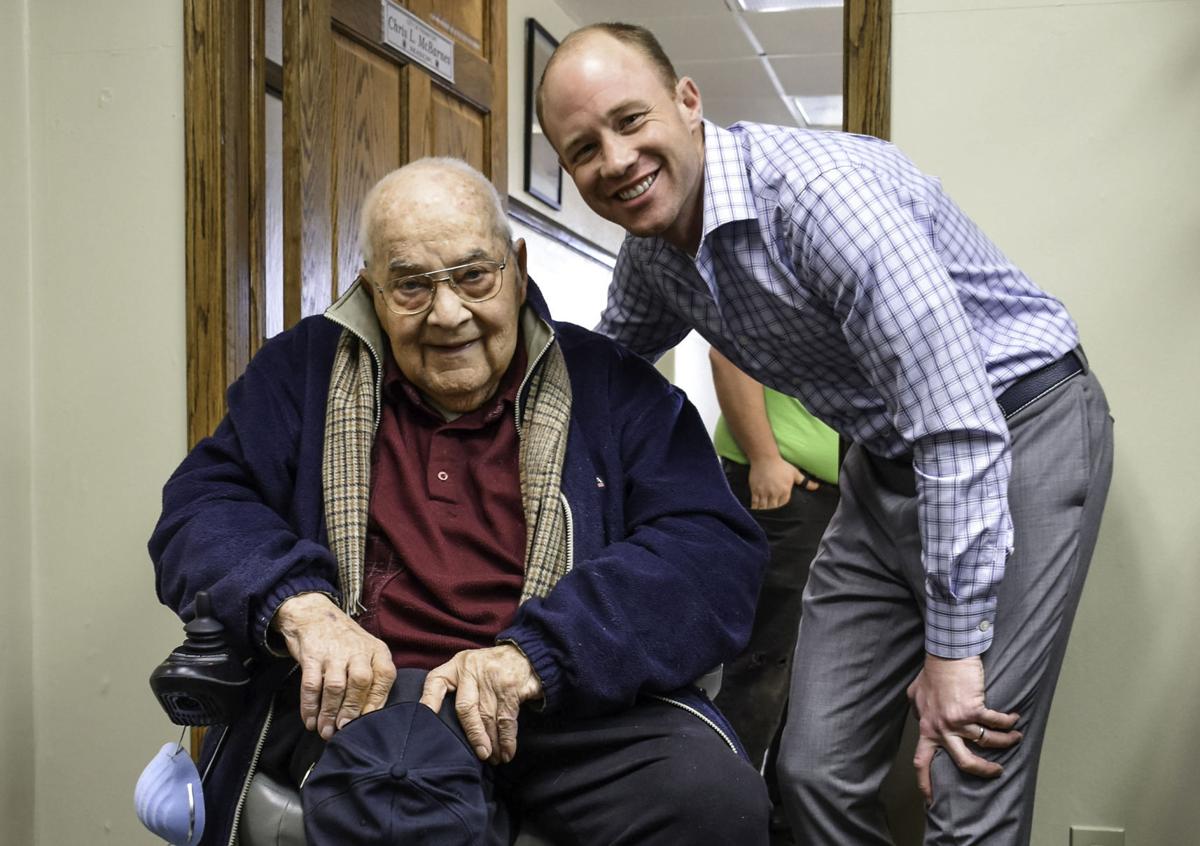 Former Mayor Harold Woodruff poses in front of his old office with outgoing Mayor Chris McBarnes during in February of 2020. 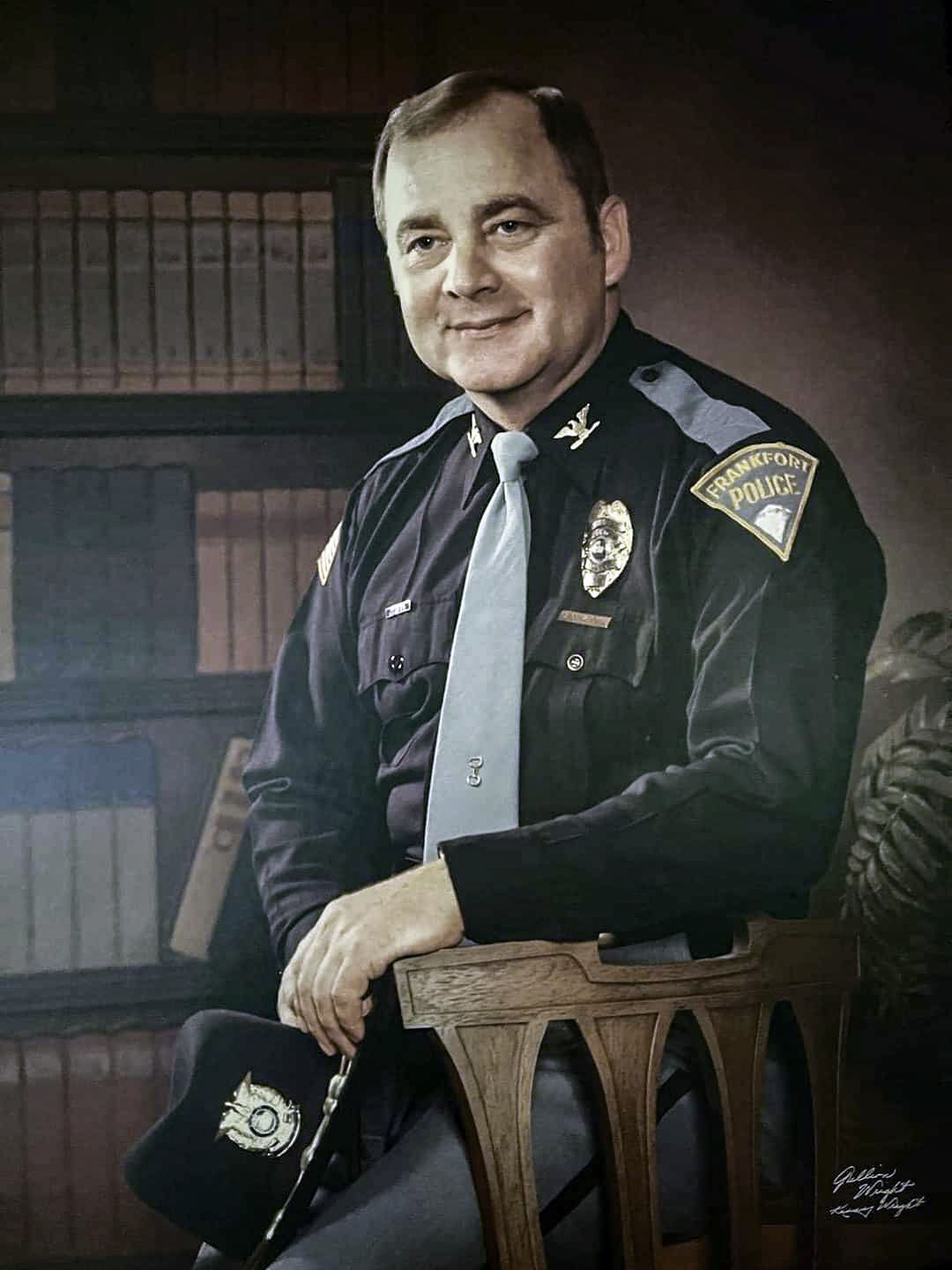 Former Mayor Harold Woodruff poses in front of his old office with outgoing Mayor Chris McBarnes during in February of 2020.

From serving his country in the U.S. Navy to serving his community, first as a police officer then two terms as Police Chief, and finally as Mayor, Harold Woodruff, who passed away May 16 at age 88, left a lasting legacy for the city he dearly loved. Some places we see or visit in Frankfort on a regular basis, (such as Veteran’s Park, Pepe’s, Arni’s, and Frito Lay East) are just a few fruits of his administration’s labor.

“Harold Woodruff was my first boss at the City of Frankfort,” current Mayor Judy Sheets said. “He hired me in 1978 to be the secretary at the Police Department, and I have been working for the city ever since. I am grateful to Harold for his leadership, the many years he devoted to the city of Frankfort and his dedicated service to our community.

“My life was blessed by Harold’s friendship and encouragement,” Sheets added. “He was definitely an inspiration to me. I will miss him.”

“Mayor Woodruff was first and foremost a dear friend,” former Mayor Chris McBarnes said. “I looked up to him and cherished every conversation we had. He was so supportive, encouraging and hopeful for the future. I wanted to be like Mayor Woodruff. He loved Frankfort and was a Hot Dog through and through. Frankfort is better for having a man and leader like Harold Woodruff. I am a better man for having known him. His vision for Frankfort was big and bold, just as it should be.”

“Harold Woodruff was a great Chief of Police,” Frankfort Police Chief Scott Shoemaker said. “He was a forward thinker. Our agency owes him a great deal of gratitude for getting us out of the basement, literally.” Shoemaker referred to when the Police Department was located in the basement of the former City Building located on North Main Street. “As the current Chief, I have big shoes to fill and will do my best to ensure all future officers know who Harold was to this city.”

Woodruff joined the Police Department in 1959 after serving in the Navy. He served two terms as police chief, from 1968 to 1972 under Mayor Jim Brown and then under Mayor Mary Jane McMahon from 1976 to 1980 when he retired.

In a 2010 video interview for Classic Frankfort, Woodruff recalled his many achievements as police chief and as mayor of Frankfort. His love for Frankfort began very early in life.

“The day I graduated high school, I moved to Frankfort, and I’ve been here ever since. I love it. The only time I left was when I was in the Navy for four years. I went to the Navy and then came right back here and that was when I got on at the police department.”

Before its current location, the police department was based in other places around the downtown, including the former water treatment building that was located on East Washington Street and in the basement of the former City Building/Billing office for the City, Light and Power.

“When I was police chief, we were able to purchase the old post office building, (the current FPD location), and turn it into a beautiful police station,” Woodruff said during the 2010 interview.

When Woodruff took office, the city building was located on Main Street with the offices located on the second floor. Old Stoney, at that time, was mainly housing the Clinton County Historical Society on the second floor. In 1995, during Woodruff’s first term as mayor, the City of Frankfort purchased the building from the Frankfort School Corporation. The first floor was renovated to make office spaces for the Mayor’s Office, Clerk Treasurers, City Engineer and Frankfort Main Street.

“One of the things I worked on most was economic development,” he said. “When I was mayor, I had a 3.2 (percent) unemployment which was the lowest Frankfort ever had. I think providing employment for people, that kind of attitude never wears out.

“Providing jobs for people,” he continued. “It was important that you kept your community working. I was always happy to put somebody to work someplace. All future mayors, my advice to them is do everything they can on economic development. That is so important. It’s an ongoing thing for your city. You’ve got to keep on working at it in order to provide jobs for everybody. I’d like to see the city keep prospering.”

Some of the highlights during Woodruff’s administration were the creation and dedication of Veteran’s Park, the petting zoo and Christmas lights at the TPA Park, the renovation of Armstrong Street, bringing the premier of ‘Blue Chips’ to Frankfort, and brining in several factories and small businesses.

“I dedicated Veteran’s Park,” he said. “We needed the park, and I was very proud of that. When I became mayor, that area was a hole in the ground and a fence around it.

Still a growing annual tradition, his administration began the Christmas lights at the park.

“That was one of our ideas,” he said. “Then we came up with the idea of the petting zoo where the kids could go in, and that was a big hit. Then we came up with the bird aviary where people could walk in amongst the birds and that was another big hit. When we did the Christmas lights, people would come from all over the Midwest to see our Christmas lights, and they still do.”

The petting zoo, Christmas lights and aviary at TPA Park were all started by a 21-year-old Parks Superintendent appointed by Woodruff.

“He took a risk appointing me,” Travis Sheets said. “Everybody else in the department was older than me. I was so grateful. We got along very well. And we stayed that way. Even in the last year, I had been out to eat with him, so we kept that relationship a long period of time.

“His slogan was the ‘Can Do City,’” Sheets added.

Since portions of the movie Blue Chips were filmed here, Woodruff convinced the movie studio to premier the movie in Frankfort.

“We got the premier here,” he said. “I was able to convince Hollywood to bring it here instead of premiering it in Hollywood.”

The idea of running for mayor began while Woodruff was a patrolman.

“When I became police chief, I became even more interested in it,” he said. “Mary Jane McMahon was one of the mayors when I was chief, and I took her to many of her meetings. I found it to be very interesting and very challenging. I could see things getting done in other cities that weren’t getting done here. I could see things we needed to do, so I tried for it and won. I was the first mayor in Frankfort history that won every precinct.

“There’s more to being a mayor that just filling a seat up there,” he added.

Another thing Woodruff enjoyed was visiting the city departments.

“I used to go out to the street department every morning and have coffee with them before they went to work,” he said. “And same for the parks department, the police department and fire department. I enjoyed visiting them. I always made the rounds to see what their needs were.

“Needless to say, I really love my city, and I loved to do things to make it prosper,” Woodruff concluded.