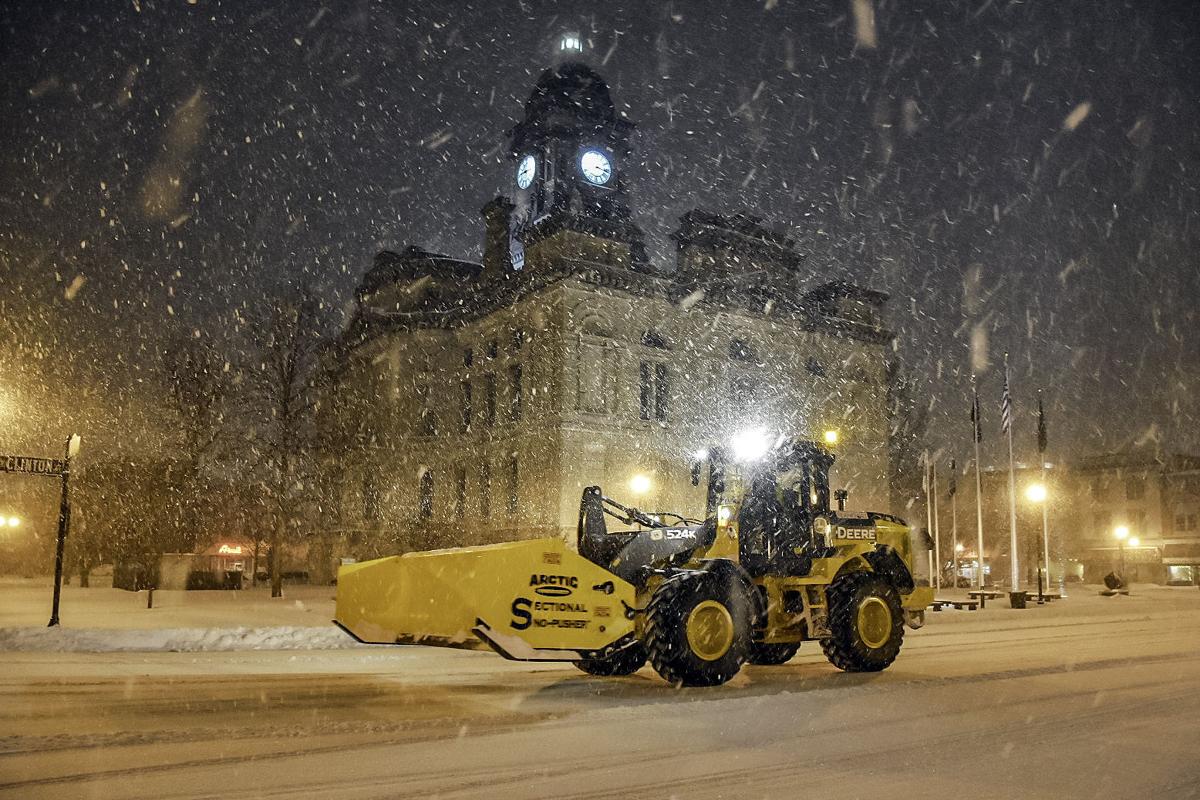 The City of Frankfort Street Department and Frankfort Municipal Utilities worked through the night to keep downtown Frankfort and major thoroughfares clear during the most significant winter storm the county has seen since 2015. 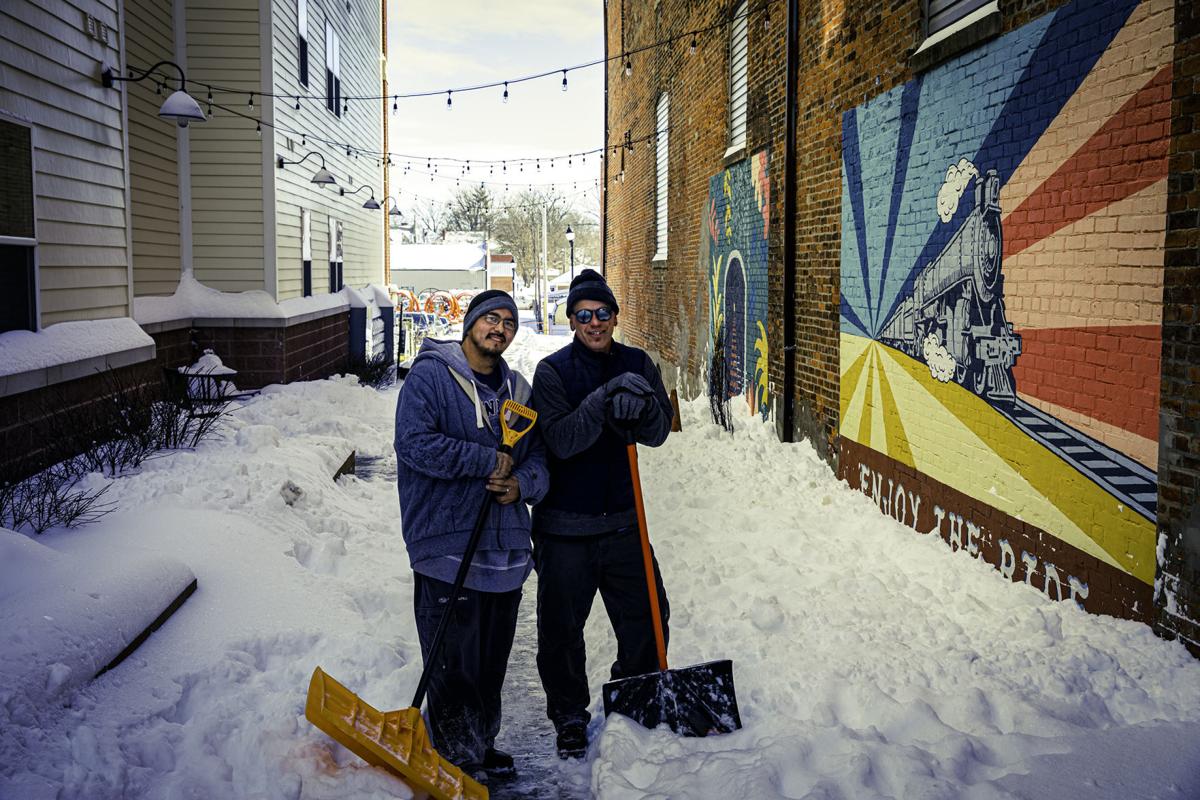 Frankfort dug out Tuesday morning after its largest snowfall event since March of 2015.

The City of Frankfort Street Department and Frankfort Municipal Utilities worked through the night to keep downtown Frankfort and major thoroughfares clear during the most significant winter storm the county has seen since 2015.

Frankfort dug out Tuesday morning after its largest snowfall event since March of 2015.

In what proved to be the most significant snowfall in Clinton County since 2015, Monday’s winter storm piled 8-10 inches of snow locally while wind gust of 25-30 miles per hour added to the difficulty of keeping major roadways clear. At 7 p.m. Monday, the county issued a travel warning which was downgraded to a travel watch at noon Tuesday.

“Throughout the day yesterday, Clinton County EMA (Emergency Management Agency) was in contact with county highway and the Clinton County Sheriff’s Office to monitor the conditions of the roads,” Clinton County Commissioner Josh Uitts said. “As the day went on, it became apparent that as fast as we removed snow, it would come right back in. At dark, we pulled the snowplows off the road because it was becoming dangerous. At that point, the decision was made to go to Red (local travel advisory) on the advice of the Sheriff, county highway and EMA. It kept cars of the roads. By noon (Tuesday), we felt comfortable going back to ‘Orange’ (Travel Watch). Luckily, there hasn’t been much wind (since overnight).

Of course, Clinton County wasn’t alone in experiencing the effects of a winter storm that blanketed much of the country in snow.

“The reason it covered a lot of ground was there was a lot of cold air sitting over the west and the plains – unusually cold for this time of the year. Below zero,” said Joe Skowronek, a meteorologist for National Weather Service in Indianapolis. “As the storm moved northeast along that cold air, that is what created all that snow. Most times, you don’t have all that cold air sitting in the Midwest. It is more usual for a storm to have less area of heavy snow. It is not unusual to get 7-9 inches. But to have that much of an area is kind of unusual. That was due to the fact that there was a lot of cold air sitting over the plains.”

In the city, Street Department Jason Forsythe and his crews were working to keep the major roads open throughout the night, and they continued to clear snow through Tuesday.

“It has been a long couple days,” Forsythe said just before noon Tuesday. “I think we got things pretty well right now. We had a lot of work to do on side roads and still have some work to do on the mains. Then the night shift comes in tonight. I think we will be able to get a hold on things.

“We started about 1 a.m. on Monday morning,” Forsythe recalled. “I have been running with 10 plows since 7 a.m. Monday morning. We were really focusing on getting our mains opened up and keeping them open. It was a difficult time. Those on the outskirts were difficult to keep open, so we were running two guys in every corner of the city and two guys floating. We had a guy working courts and cul-de-sacs. They were in pretty good shape before that second wave hit. But then it slowed down, so we tried to open the mains, and I thought downtown looked pretty good when I went home last night. Today (Tuesday), we have been really hitting side roads as best as we can. They did not get a whole lot of attention previously because we were trying to get the mains.”

Forsythe said that this was the largest snow event he has dealt with since becoming they city’s street department superintendent in 2015, and it helped when the county declared a travel warning from 7 p.m. Monday to noon Tuesday.

(Frankfort Municipal) Utilities have been a great help to help clear as much snow as we can with loaders,” Forsythe added. “Then I have 10 guys out and an individual working sidewalks in downtown with businesses possibly opening back up with going to orange at noon.”

“It will be a feat to do that with these alleyways,” Forsythe said. “People need to bear with us with that. If you usually have trash picked up at 10 a.m., it probably won’t be at 10 a.m. (Wednesday). We will have several trucks out trying to get it down, but it will be much more difficult on the guys to try to pick up trash.”

Forsythe hopes that additional snow does not complicate things later this week.

Skowronek confirmed that there is the potential for more snow this week.

“I am just glad to get through last night and this morning,” Uitts said Tuesday afternoon. “What is more concerning to me is, as light as the snow was, if we get any wind at all, we will battle this until it melts. We will continue to fight that. Hopefully we won’t get any wind, we get some sunshine, and things will melt a little bit.”

Uitts doesn’t remember a larger snowfall in Clinton County in his time as a county commissioner.

“We were pleased with how well our county highway (department) did and how they worked with the Sheriff’s department and EMA to keep an eye on it and give us information we need to make a decision,” Uitts said. “We have a new highway superintendent. Rick Campbell has been baptized by fire, so far. (Former highway superintendent) Kevin (Myers) got out at the right time.

“I was pleased with how it went,” Uitts continued. “Most of the main thoroughfares have been opened up and plowed. Obviously, there is 400-some miles of county roads to take care of, and it takes a little bit of time.”

Many local officials were thankful for the many volunteers who helped clear snow.

“I really appreciate everyone’s help,” Forsythe said. “We only have so many guys. For those guys to step up and help us out, we appreciate it very much.”