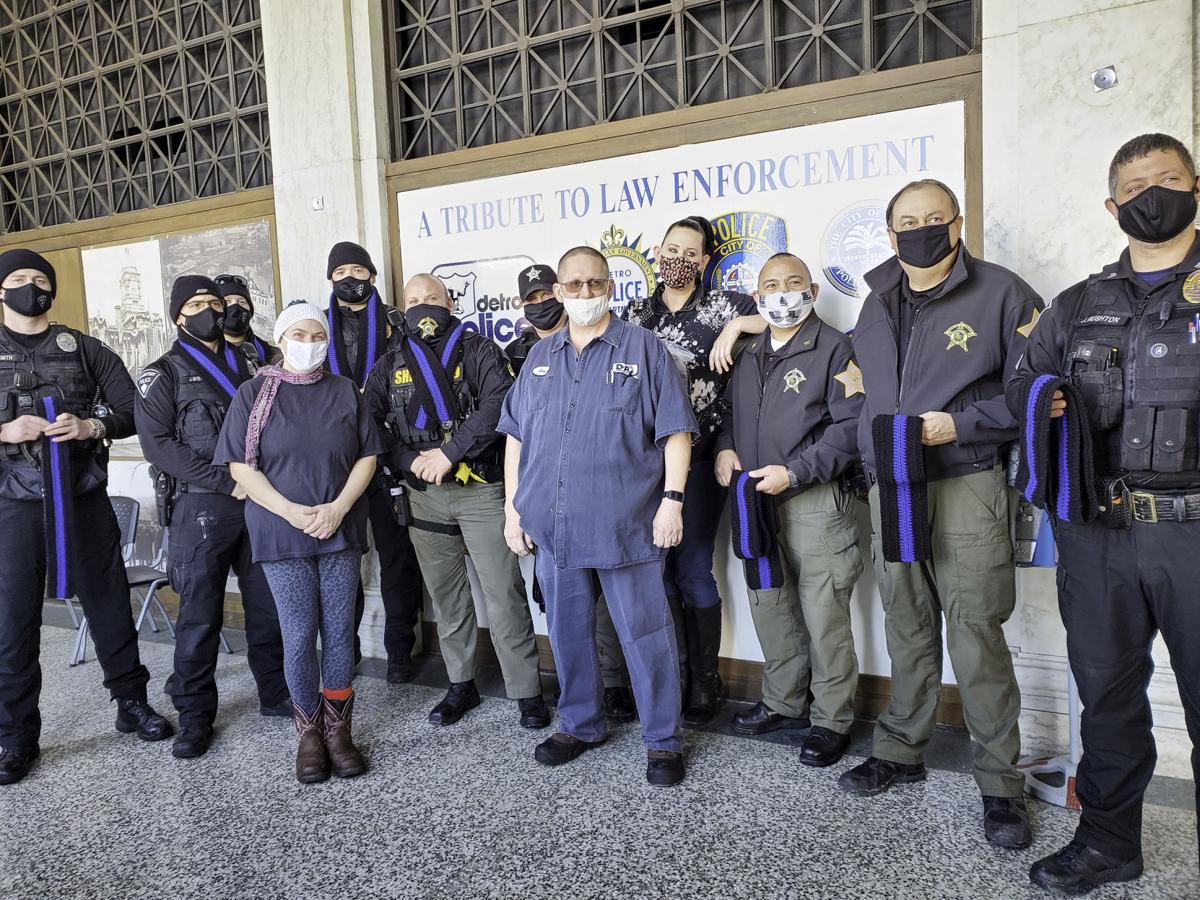 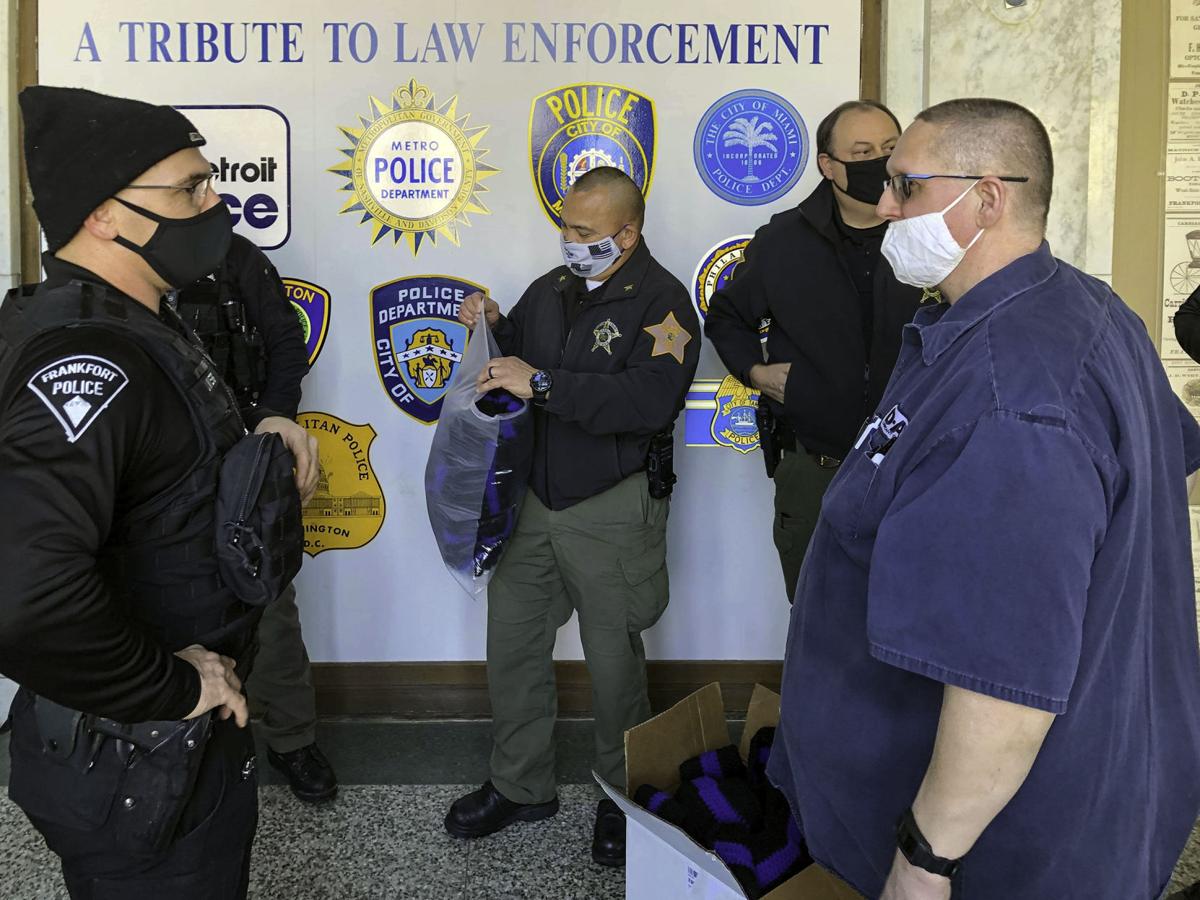 Jim Chapman speaks with Jake Myers, who was his instructor during the 2019 Frankfort Citizens Police Academy.

Jim Chapman speaks with Jake Myers, who was his instructor during the 2019 Frankfort Citizens Police Academy.

As a gesture of appreciation, a group of Frankfort residents delivered over 80 “thin blue line” scarves to local law enforcement agencies on Friday afternoon at FPD Headquarters.

Jim Chapman, a 2019 graduate of the Frankfort Citizens Police Academy, was inspired when he saw residents of another town in the region do the same thing on social media. So, he posted a call for people who would like to help make scarves for law enforcement officers in Clinton County. That call was answered by a handful of local residents including Angie Rogers, Cindy Wells, Erica Essick, Jennifer Davis and Chapman’s wife, Melinda.

“I used to live in the Bunker Hill-Kokomo area,” Chapman said. “I subscribe to the law enforcement Facebook pages for Peru and Kokomo. I saw on the Peru site that someone had done that for their officers, and I thought it was a good idea. I always wanted to do something for our officers in Frankfort.

“I reached out on Facebook with the idea and got a lot of feedback from people,” he continued. “My wife agreed to make some as long as I bought material for it, and I did. Jennifer Davis got on board with it, and we had a few others get on board with it as well. Some donated money for the project to buy the yarn or make a monetary donation toward it.”

On Jan. 12, Chapman created a Facebook Messenger page so that those involved could coordinate their efforts to create enough thin blue line scarves for all the officers that could use one in Clinton County.

“My mother saw a post on Facebook asking for help with the project and volunteered me,” Rogers said. “I thoroughly enjoyed doing it though. I appreciate our men in blue and all they do for the community. Frankfort is blessed to have the officers that we do. I was disappointed to not be able to go with the group to gift them. It was a pleasure and an honor to use my skill to help out.”

By last week, the group had enough scarves to give one to each officer.

“It was a privilege and honor to be able to be part of the thin blue line scarves project,” Melinda Chapman said. “My husband saw where someone had done this for their local department and thought it would be great to show our support, and I was all on board. I just asked him to reach out for help from others since we needed so many for both the sheriff and police departments. I felt truly blessed to be able to be a part of such a special project to support our local law enforcement.”

So, on Friday, Chapman and a few of the scarf-makers delivered the thin blue line scarves to the Sheriff’s Office and FPD. Among the nine law enforcement officers there to receive the scarves were Sheriff Rich Kelly, FPD Lieutenant Evan Hall, FPD Sergeant Jeremy Rushton and FPD Officer Jake Myers.

“I am a graduate from the Frankfort Citizens Police Academy,” Chapman said. “My instructor, Jake Myers, was there as well as several other officers. They were very appreciative. They thanked us so many times. Shortly afterward, the FPD and the Sheriff’s office posted on Facebook. (The FPD) had a lady from the front office there taking pictures for us.”

“I think they really liked them,” Davis said. “There were a few guys who went ahead and put them on. They were surprised by it. Giving a little bit back is a nice thing to do. It was fun, and it had a good reason behind it.”

Chapman believes it is important to show appreciation for the work that law enforcement does.

“I think it is extremely important – especially in today’s world,” he said. “There is so much negative press about police, in general. It is like everything else in life. You are going to have your bad apples no matter where you go. Just because you have one or two bad apples don’t mean that everyone in that department is that.

“I always had respect for the police, no matter what,” Chapman added. “It feels good to do something for the community and to honor those who serve day and night to protect us. When I went to the Citizens Police Academy, I grew a greater respect of the police than what I already had. I learned what they go through. It is a very educational program, and I recommend it to everybody.”

“James Chapman, who was a member of our citizen academy, him and some others who were alumni of that put this program together,” Deputy Chief James Skinner said. “And it was awesome. We appreciate their thoughtfulness. We couldn’t have a better winter for something like this, for us to stay warm.”

Sheriff Kelly said that his agency is greatly appreciative to be in a community that shows so much support for law enforcement.

“For those individuals to dedicate time and money to give back to the officers who serve our county means the world to each of us who go to work every day to provide a service to all of you,” Kelly said. The thin blue line has such a deeply embedded meaning in our field. It is a symbol we hold dear to our profession, and we are honored to display it in many ways.

“I am eternally grateful to serve as Sheriff of Clinton County and to represent the fine men and women of the Clinton County Sheriff’s Office,” Kelly added. “Thank you to everyone involved in the Thin Blue Line Scarf Project. We appreciate your time, your support, your efforts and all of you.”

Sorry, there are no recent results for popular images.