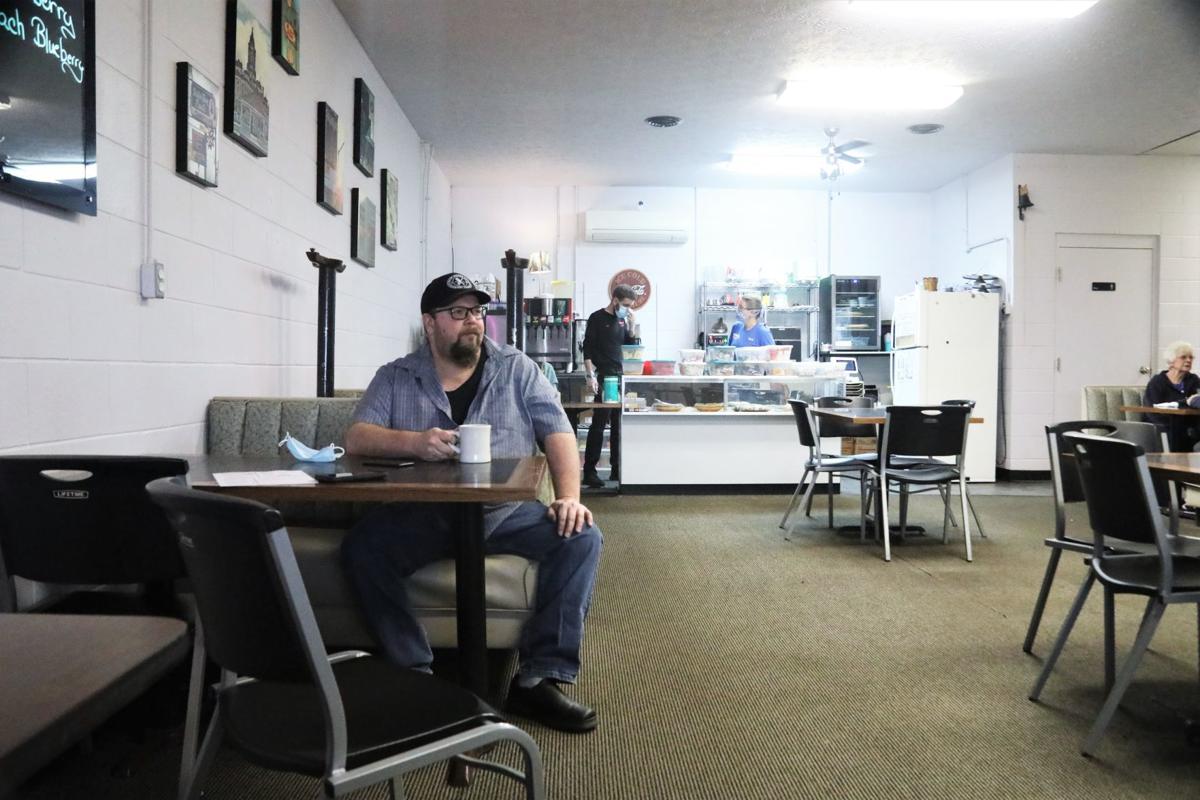 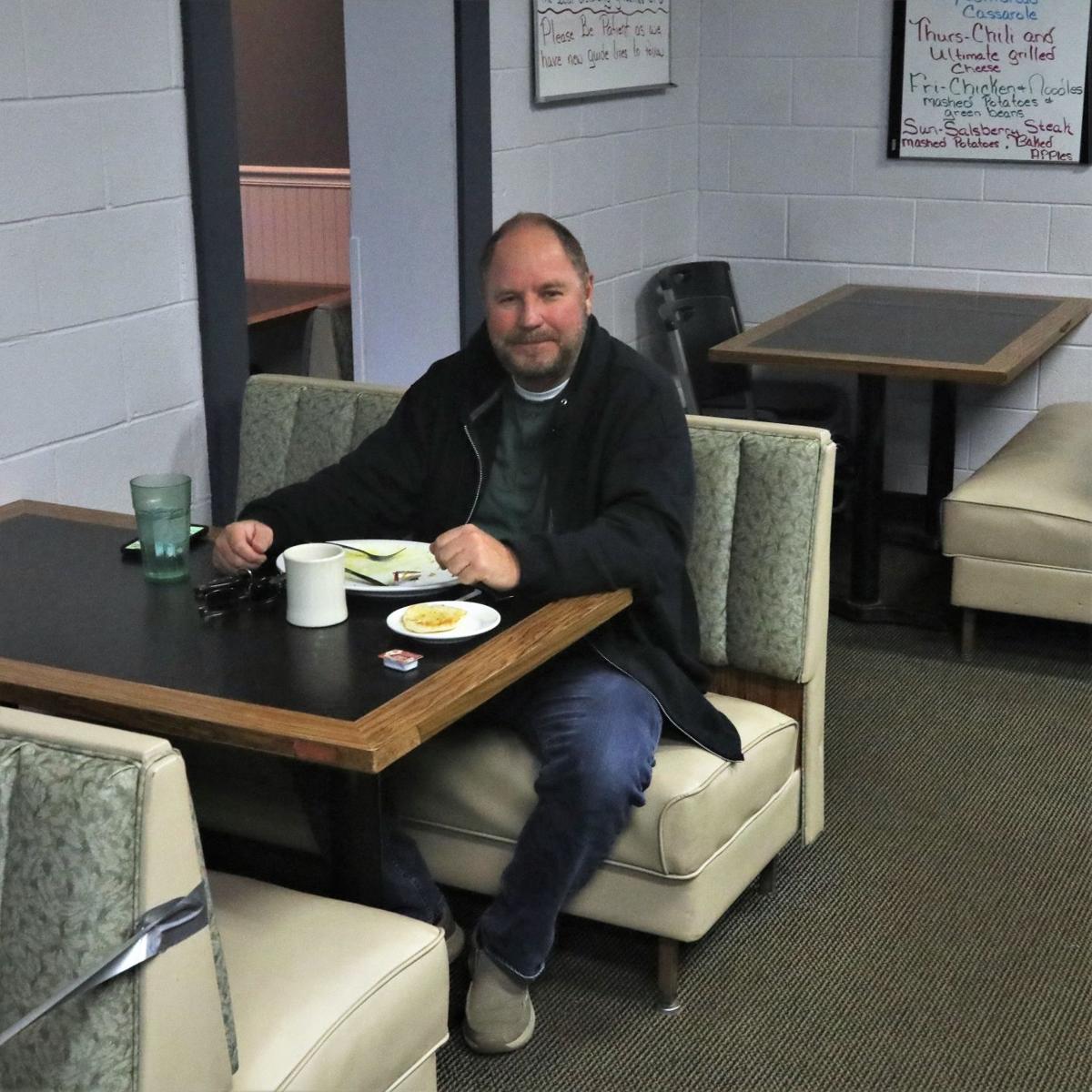 Jim Anderson of Frankfort returned to the Downtown Diner on Tuesday to once again enjoying breakfast and coffee there. 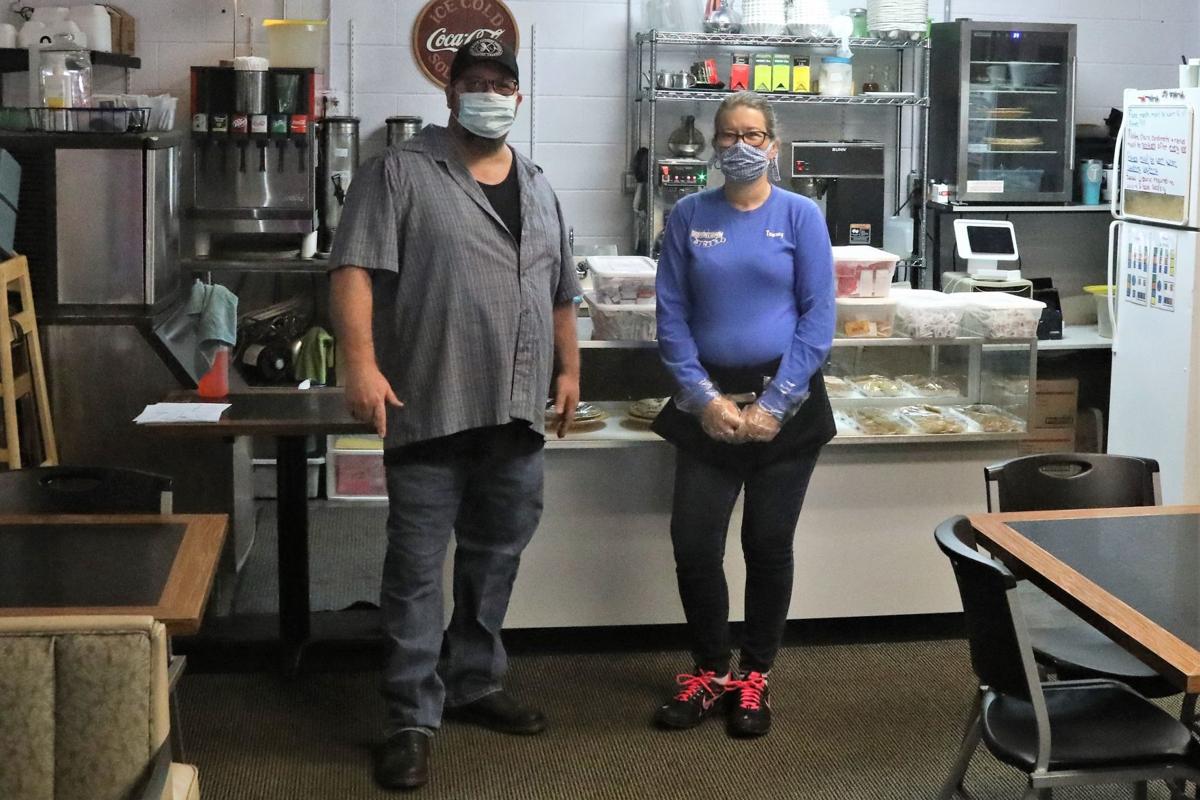 From left, Mark Williams and house manager Tammy Stevens stand in front of the pie case inside the Downtown Diner.

Jim Anderson of Frankfort returned to the Downtown Diner on Tuesday to once again enjoying breakfast and coffee there.

From left, Mark Williams and house manager Tammy Stevens stand in front of the pie case inside the Downtown Diner.

The Downtown Diner is one of many locally-owned restaurants which opened its doors to dine-in patrons Monday for the first time since March 16.

“It was nice seeing some of the old faces,” said Mark Williams, general manager of the Downtown Diner. “It was obviously slower than normal, but it was nice to at least come in and see the customers.”

Following guidelines set forth by Gov. Eric Holcomb on May 1, restaurants are now able to open at 50 percent capacity while servers and kitchen staff are required to wear face coverings.

“Obviously, the state officials have set guidelines, and we are abiding by the social-distancing,” Williams said. “We have moved our tables six feet apart. We are offering hand sanitizer at the front door. Fifty-percent capacity puts us at about 32 customers, which is about seven or eight full tables, so we are doing whatever we can to make sure that everybody is safe and still able to eat.”

The Times wrote about how businesses like the Downtown Diner and Johnny V’s were adapting to the closing of their restaurants to dine-in customers just two days into the restrictions back in mid-March. After doing about a week of carryout business, the Downtown Diner stopped doing businesses altogether. They didn’t open again until last week when they resumed carryout business in preparation for this week.

“It is almost allowing people to get back to somewhat of a normalcy,” Williams said of the re-opening of restaurants. “People are getting tired of eating out of Styrofoam. So it was nice to be able to do that. We are still getting call-ins, so it is a person’s preference whether they want to come in or not. There are still a lot of people that are staying home and not going out, so we are just adapting to whatever we need to do here at the diner.”

Not all restaurants have decided to re-open to dine-in customers quite yet. Among them is the Frankfort Arni’s, which announced via a posting on its Facebook page Tuesday that it will remain closed to dining-in until further notice and will continue to serve its food via carryout. Also locally, Los Amigos and 3D’s Pizzeria are also not yet open to dine-in customers.

One of the regulars who came back Tuesday morning to enjoy a meal and chat about the ongoing situation was Jim Anderson of Frankfort.

“It is nice that they have opened it back up,” Anderson said. “Of course, there was a lot of debate on ‘Are we opening up too soon, or are we going to wait too late?’ If it’s too late, it’s too late. So, I think we should have went with a more targeted approach to help protect the seniors.

“I have yet to see any numbers of how many business are going to go under, how much mental health strain, how many people have actually died because of drug overdoes or suicide,” he continued. “This happens. Any time the GDP (Gross Domestic Product) number goes down like one percent, a certain number of people lose their jobs and the mental health aspects cause them to take their own lives or get involved in more drugs or alcohol, divorces and all of that. It is a slippery slope on what you need to do. But, my personal view is that they should have taken a more targeted approach – protected the most vulnerable. In essence, this virus is very mild to the majority of the population.”

Anderson said that he made an effort to help support local restaurants over the last seven weeks.

“I would get carryout here before they decided to shut down,” he said. “I tried to hit everybody. I went to Johnny V’s and Pepe’s. I have been trying to support the local restaurants, not just the McDonald’s and Wendy’s because they do a lot of drive-through business anyway. The mom and pop shops like this, the majority of it is dine-in customers. It is not carry-out.”

Williams was glad to have Anderson and his other customers back. He was equally glad to be able to bring nearly his entire staff back to the diner after having to close in late March.

“It was a big change for a lot of the small places,” Williams said. “We have a lot of food that I ended up giving out to employees and people they knew so that it wouldn’t go to waste. You can only keep product so long, so it was hard to see a lot of that go, but that is part of it.

“As of right now, surprisingly, all of our employees other than one are going to return,” he added. “Out of the 16 employees, we only lost one. So that is very good news and surprising.”

For now, Williams hopes that business picks up and looks forward to the day when he can open to 100 percent capacity.

“(Opening to 75 percent capacity) really isn’t going to change us because our tables are where they have to be right now anyway,” he said. “So, 75 is really the same. We are going to try to survive until we reach 100 percent. Everyone is excited to at least see that on the horizon now instead of wondering.”

Williams offers no prediction of what the rest of the year will look like for locally-owned restaurants like his.

“Honestly, I can’t really answer that,” he said. “That is part of the uncertainty of all of this. It could change next week. We just have to go with what the officials are deciding. I hope that we eventually get back to some kid of normalcy at the diner. I don’t see it overflowing as you would like to see as a business owner, but we will provide what customers want and do our best to keep that going. We are all pretty much all in the same boat.”