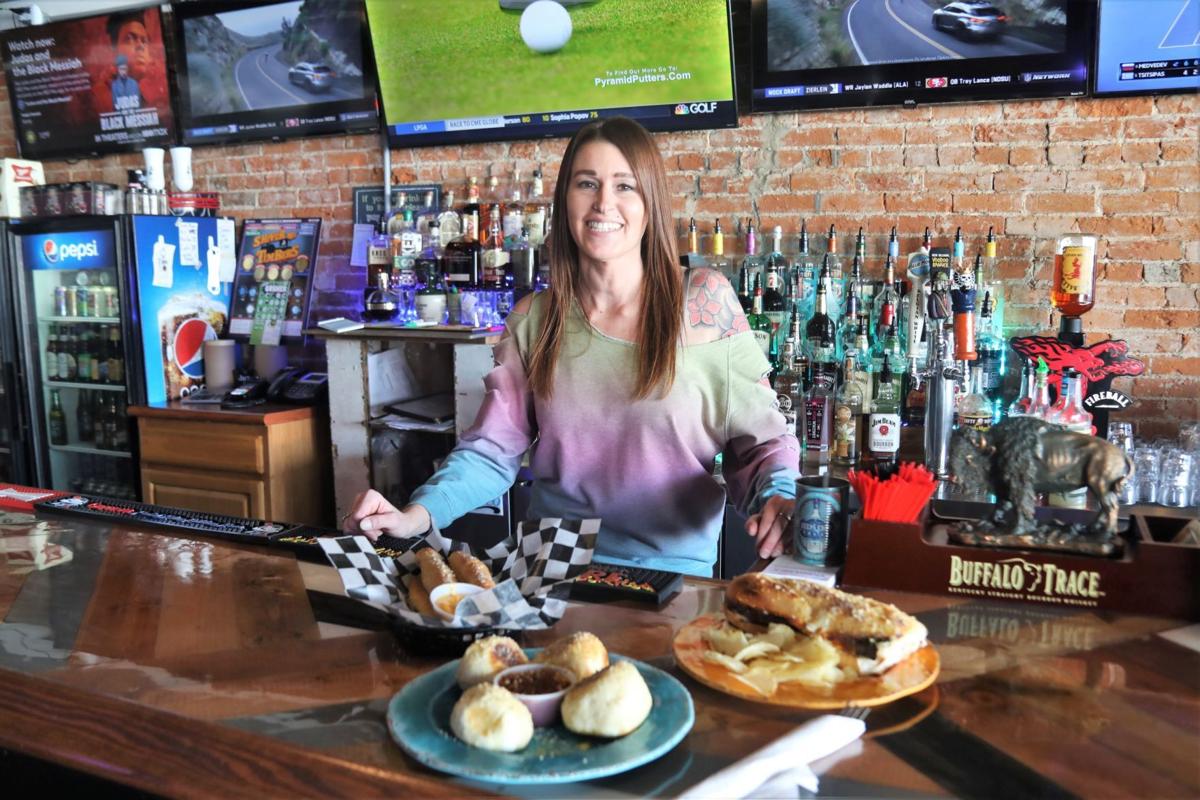 Andrea Simmons serves up an order of breadsticks, Bobbers (meatballs and cheese baked in breadstick dough) and a Chicken Bacon Ranch submarine sandwich to the bar at Rossville Water. 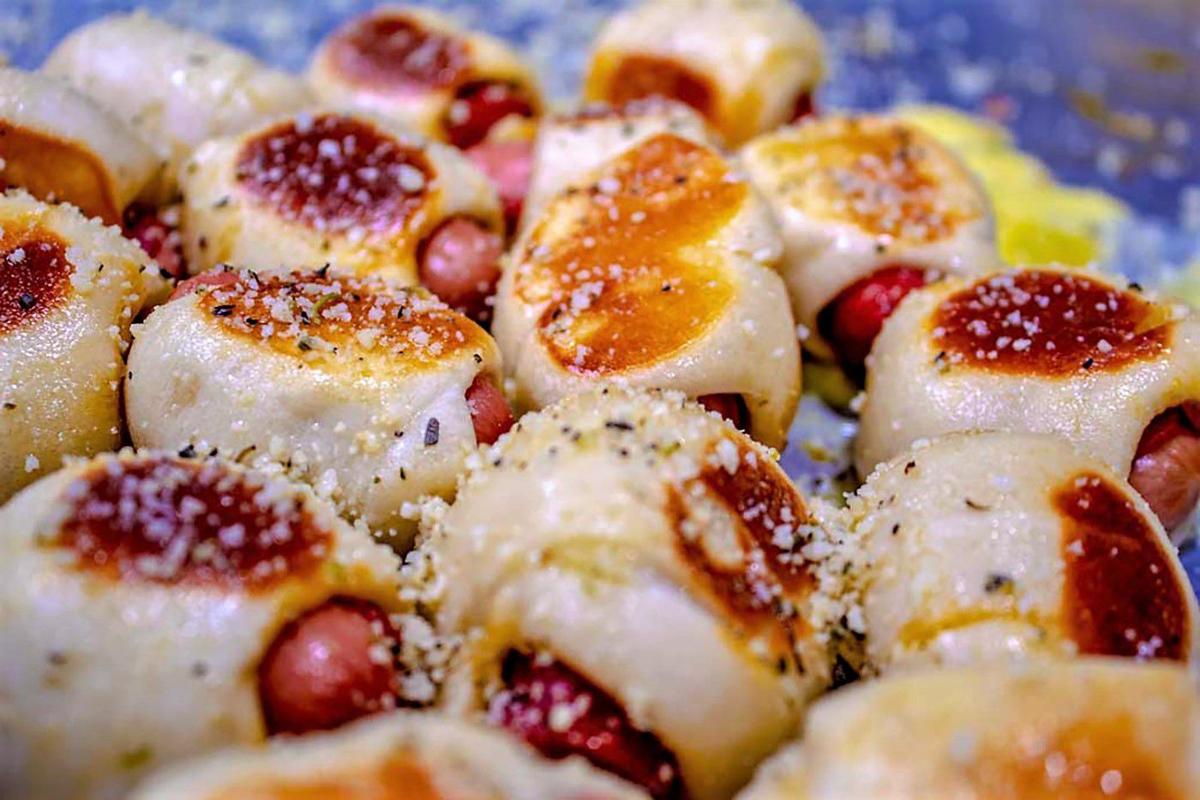 Rossville Water’s Stuffed Nibblers are a combination of pigs in a blanket and pepperoni pizza rolls. 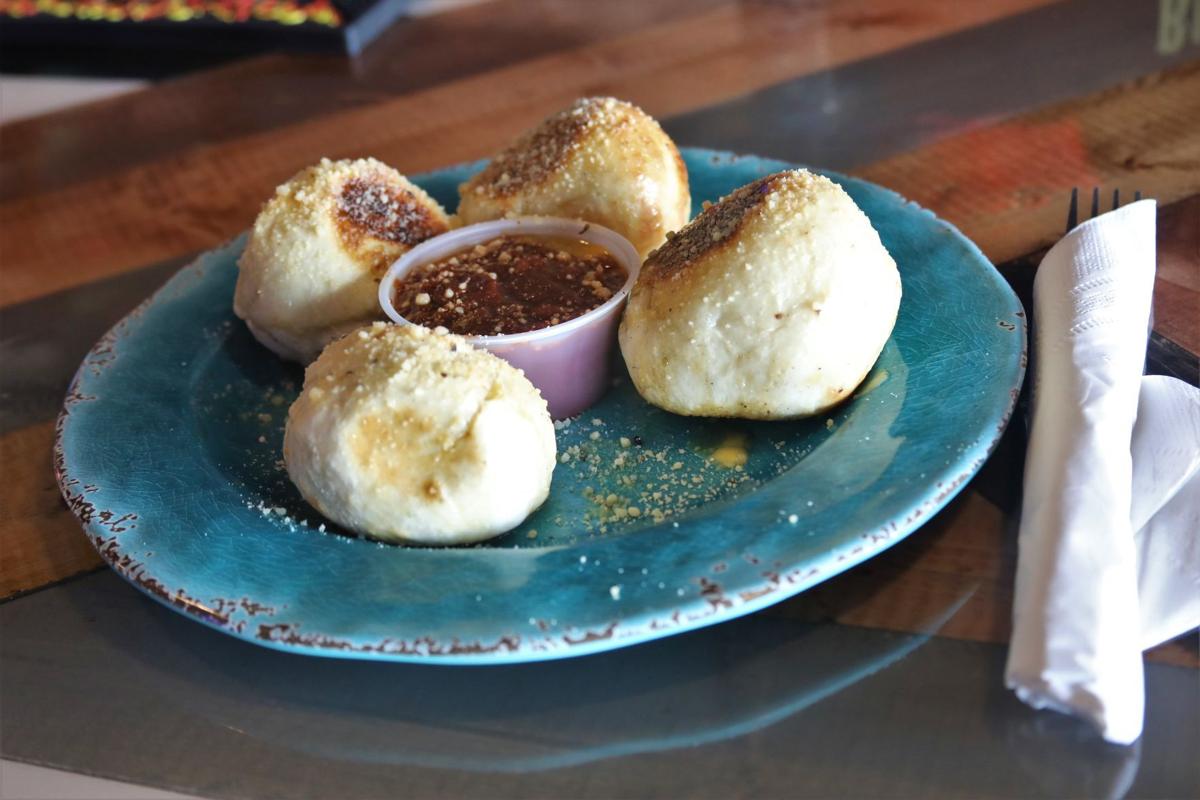 Andrea Simmons serves up an order of breadsticks, Bobbers (meatballs and cheese baked in breadstick dough) and a Chicken Bacon Ranch submarine sandwich to the bar at Rossville Water.

Rossville Water’s Stuffed Nibblers are a combination of pigs in a blanket and pepperoni pizza rolls.

The owners of The Dock Burlington Boathouse and The Dock 231 in Lafayette, Richard Knight and Pam Wentworth, opened Rossville Water to the public on November 16 at 9 S. Plank St.

“It was a good location, and it was available,” Wentworth said of the decision to bring the restaurant-bar to Rossville.

“She is the visionary,” Knight said of his co-owner, Pam. “For several years she has thought that Rossville could support a small, ‘mom-and-pop’ bar. She had been looking and looking and nothing was quite right. This was a 30-plus year antique/second-hand store. The lady decided to be done, and she sold the building.

Wentworth says that the newest addition to The Dock series of restaurant-bars has been busy ever since opening in mid-November.

Rossville Water has already drawn regular customers, among which is Rossville native Jon Friend, who was enjoying his lunch there Friday.

“The food is good,” Friend added. “I eat here every time I come here. My favorite is the Chicken Bacon Ranch Sandwich.”

“It is a great place to just hang out,” Knight said. “It is kind of like a Cheers already. We already have regulars. This guys sits at this chair. Everyday he comes in at 3 p.m. and sits there, and this guys sits over here, and these guys sit at a table over there. You already know everybody’s name.”

The newly built interior of Rossville Water includes its large bar, exposed brick, lots of natural woods and the use of 100-plus-year-old tin repurposed from the Burlington location.

“It was an empty shell, and (Pam) would come in here, walk around and figure out what it was going to look like,” Knight said. “We had this beautiful exposed brick. This is a pre-WWI building, so it has a lot of history. It has generational memories. To me, it is a pretty unique building.”

Half of the current restaurant/bar was the location of Sanitary Lunch long ago.

The ownership duo made the decision to take on the Rossville location in March and spent the summer constructing the attractive interior.

Opening a new location in the midst of a pandemic took some extra time.

“It was difficult,” Knight said. “We got our liquor license in April and didn’t get to open until Nov. 16. There were little hurdles to get over constantly. So, it was a little tough. You can’t blame any particular person. That is what it was like for anybody trying to open up during that time period.

“Once we opened the door, people were in here,” he added. “They would stop and knock on the windows. ‘What’s going on?’ ‘What are you putting in here?’ Everybody got excited. It was neat to see that in a small town.”

While Rossville Water is currently working with a menu that features mainly submarine sandwiches, salads and some appetizers, Knight says that plan it too eventually open up the same large and diverse menu offered at their other locations – with the exception of pizza.

“We don’t have a a grill. We don’t have a fryer,” Knight said. “So we don’t make hamburgers, tenderloins and that stuff. The menu right now is sub sandwiches, a few select appetizers from our other menu and a couple salads. The Cobb salad is almost our No. 1 salad, and the Chicken Bacon Ranch and our Sicilian are our two best-selling sandwiches.

“When the hood system (for the kitchen) gets here, if you get online and look at any of The Dock menus, you will see that it is a pretty good-sized menu,” he added. “The plans are under review by the state. Once we get the hood system in, we are known for our burgers. We have phenomenal burgers. We have a boatload of specialty burgers. Our Lafayette store has 15 specialty burgers, so you have a range of flavors and taste profiles.”

Rossville Water wants to be known as the local place for good live music on the weekends, trivia nights, tasty food, craft beer and a place to watch sports events on their 10 TVs.

“We have Ryan Rollins,” Knight said. “He is a local. He is the piano man for the Knickerbocker in Lafayette on Fridays and Saturdays. So, he comes here on Tuesdays to sing, play trivial and, if he can get the crowd into it, he will do Karaoke. So, it is an all-encompassing Tuesday night. It is really kind of fun.

“On every other Sunday, we have a young man named Hunter Wainscott,” he added. “He just sits up in his corner and plays for two hours. It is really nice. You can talk. He is not too loud. You can talk and hear some songs. And he get the crowd going for sing-along songs. It is a nice, lazy afternoon on Sundays. And then, a lot of Saturdays, we have live music.”

“We try to provide a great atmosphere, great food and fun events,” Knight continued. “And we are very committed to our communities – charity runs, bike runs – whatever it is, we get involved with our local community.”