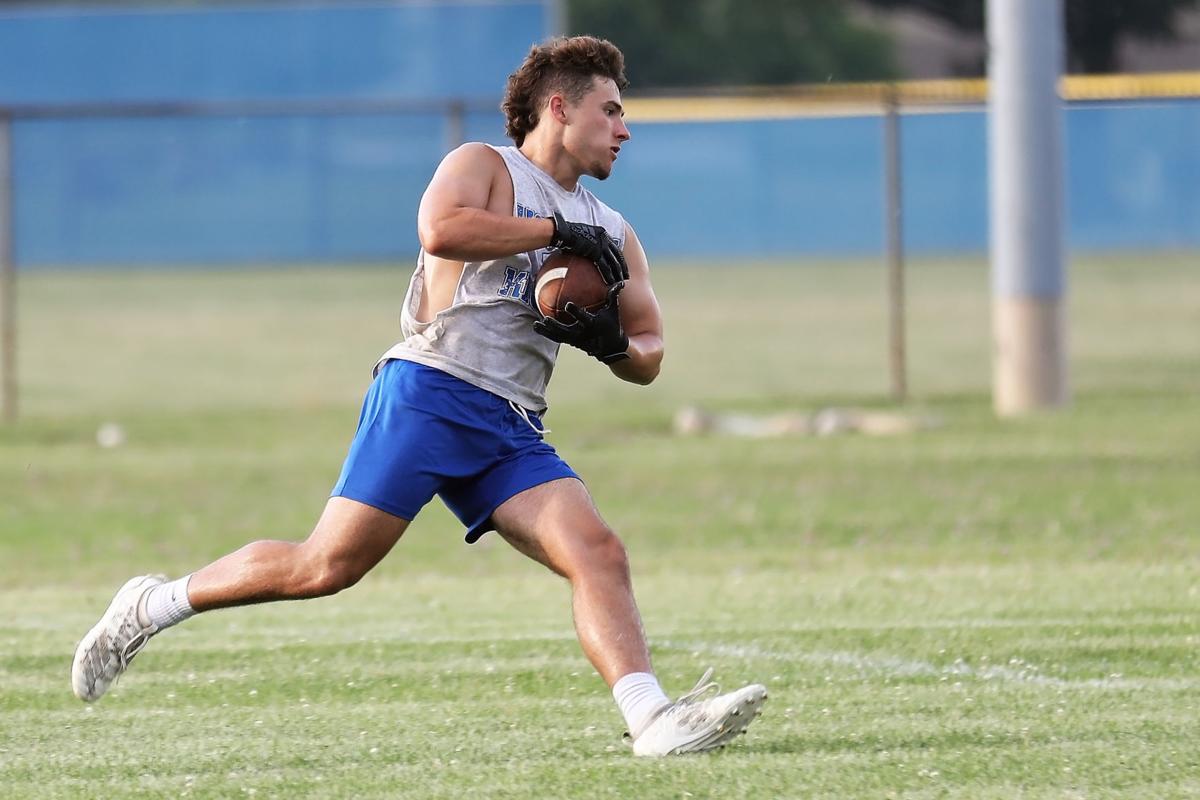 Frankfort senior Jade Ayers runs after making a catch during the Hot Dogs’ first practice Thursday. Ayers missed his junior season of baseball due to the spring season being canceled. 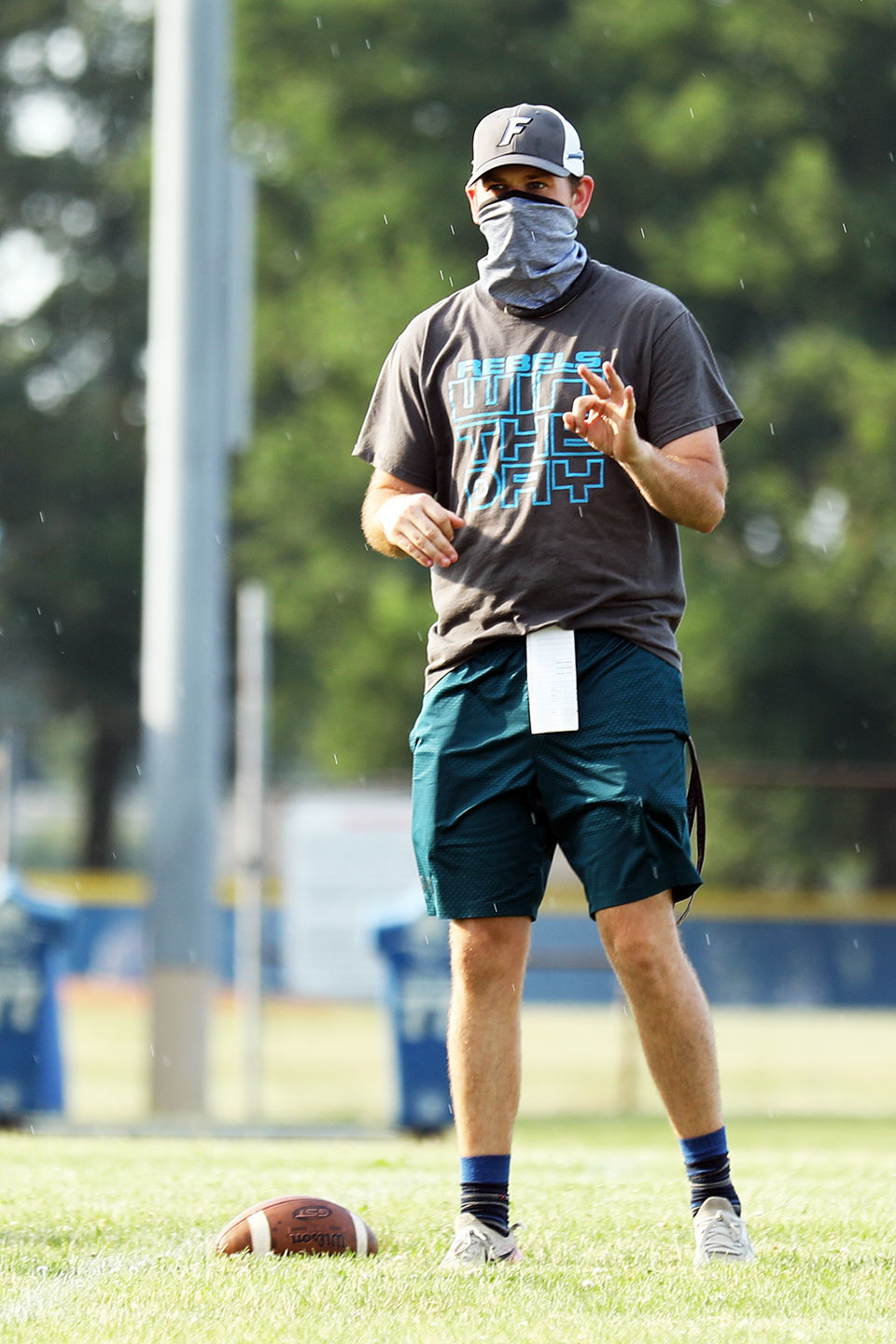 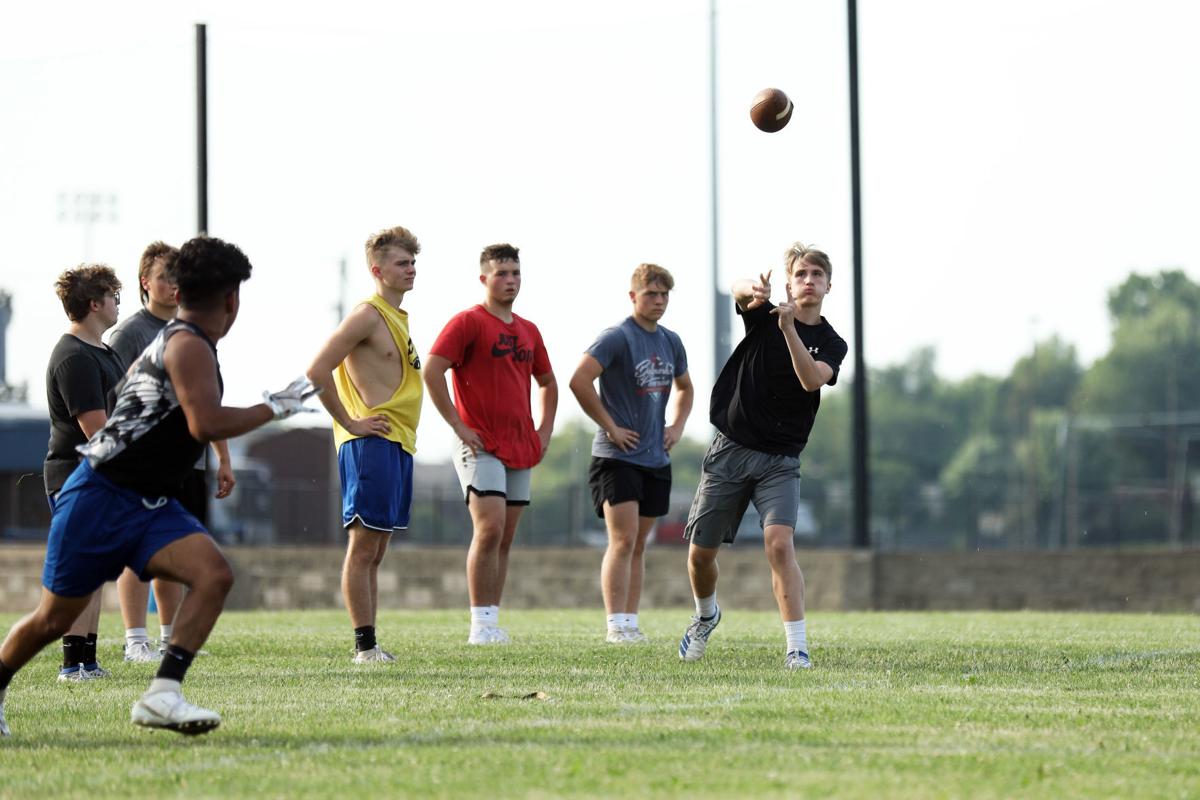 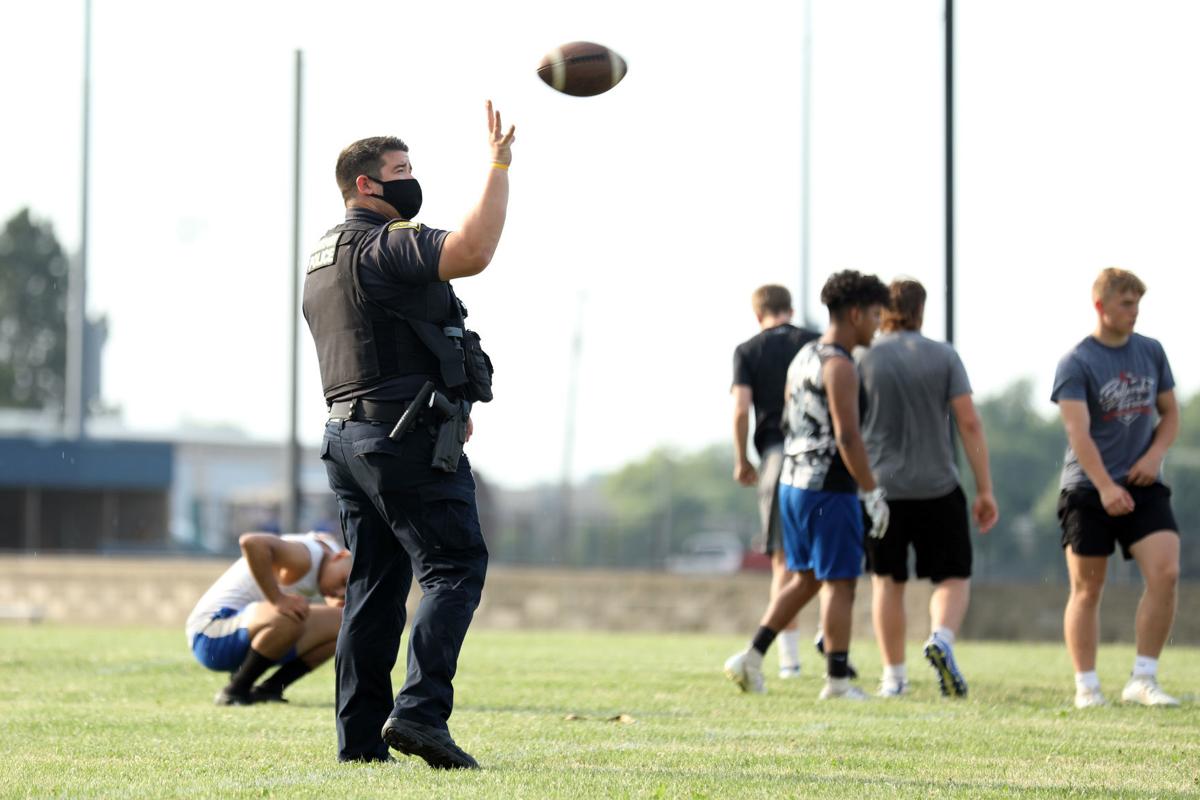 Frankfort Police Department Lieutenant Evan Hall is one of the volunteer coaches for the Frankfort football team. Hall and the rest of the coaching staff are wearing masks during practices.

Frankfort senior Jade Ayers runs after making a catch during the Hot Dogs’ first practice Thursday. Ayers missed his junior season of baseball due to the spring season being canceled.

Frankfort Police Department Lieutenant Evan Hall is one of the volunteer coaches for the Frankfort football team. Hall and the rest of the coaching staff are wearing masks during practices.

With school sports in Indiana now able to begin practices, the Frankfort football team was among the local programs that showed up for their first sessions this week. It was the kind of sight rarely seen since school sports were stopped in the midst of the high school boys’ basketball tournament in March.

“It was really good,” said James Byers, head coach of the Hot Dogs, who had their first practice Tuesday. “It was exciting to see all the kids again. We haven’t been around them since March, so it was good to have everybody back out there. They are working hard. We have a lot to catch up on with losing April, May and June, but they are putting in the work, and that is what is really important.”

The players are not yet wearing pads and helmets this early in the practices. Byers and his coaches, however, were equipped with a totally different type of face mask.

“All the coaches had masks on, and we have a checklist of questions that we ask the kids every time they show up and report,” Byers said. “We keep the kids in specific groups so we can contact trace, and we practice social-distancing.”

The Hot Dogs football team is allowed to practice twice a week right now, so they meet on the practice field every Tuesday and Thursday.

“The face mask part gets a lot of getting used to,” Byers said. “You are sweating, drenched and trying to talk through the face mask. You might be repeating yourself a lot, but we are just thankful to be out there again and have a chance to play a season.”

Other teams in the county will be using similar strategies to minimize the risk of spreading the novel coronavirus. Rossville’s coaches waited for guidance from its school board, which met Tuesday night, before having their first practices. Kathy Martin, the head coach of the Rossville volleyball team, said that Thursday would be her squad’s first practice.

“We are actually doing pre-screening as the girls enter,” Martin said. “Before they do anything or get ready, they will do a pre-screen test with us as they wear their mask. They will wash their hands and social-distance. They will come ready to go. No locker rooms. We will split into three smaller ‘exposure groups.’ They stay together for two whole weeks. They will have the same coach for those weeks, and we actually go to different gyms to separate the girls. After practice, we clean all the volleyballs and equipment. We spray their knee pads and all that stuff.”

If the fall season starts in early August as planned, there will be more adjustments to be made.

“A lot of that is still in the discussion phase,” Byers said. “(Frankfort Athletic Director) Mr. (Ed) Niehaus and (Frankfort Principal) Mrs. (Cindy) Long keep preaching to ‘Stay positive and stay flexible.’ So, we are trying to work out all the details of that. A lot of it comes from the guidelines that come from the state and the IHSAA. They are trying to make those plans. They are going to do what is in the best interest of the kids, and we are going to make sure that kids are protected and kids are safe.

“So, stay flexible, stay positive, and be able to change and roll with it,” Byers continued. “Like wearing face masks – it is something that you gotta do. We told coaches that is something they have to do, and they got on board. I think those things bode well for us to get a season in, which would be big. Our boys are itching to go back to competing and playing.”

Martin and her Hornets also realize that things will be different if the season goes ahead as planned.

“We are hoping that we get on to a full schedule in the fall, but we know things will look different,” Martin said. “We were told to expect masks as we travel. Everyone will have assigned seating. We have even had discussions about locker rooms and what that may or may not look like. We are trying to prepare as much as possible in case things like that come up. We just want to be able to have sports that fall season.

“It is definitely different,” Martin added. “We are willing to do these precautions to keep safe and to be able to have sports this year – to do this to the best of our ability. Everybody is in the same boat. Now it is about getting through the water so we get to volleyball season.”

Many of Byers’ and Martin’s players are multi-sport athletes who missed their spring season.

“I really felt for those guys like Sam Michael and Jade Ayers,” Byers said. “Ayers lost his junior year of baseball, and Sam lost his sophomore year of track. They have a developed understanding that each day we get out here is important, and we are going to make the most out of it.

“As of right now, we are hopeful that we will be able to play,” he added. “Like I told the guys, every day we get is a blessing because, right now, we are not promised anything else. So, we are just taking it one day at a time.”