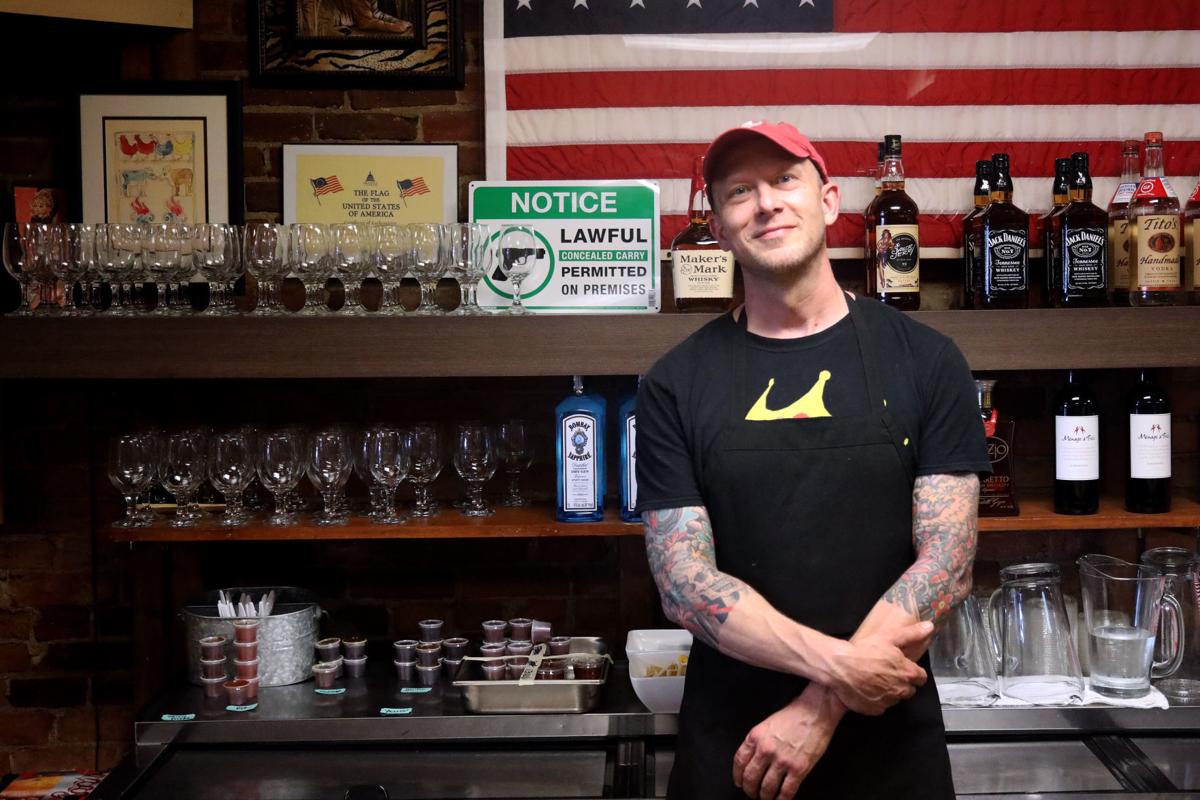 Joseph Bookwalter, the owner of Slabby’s Food and Freedom, re-opened his restaurant on May 14 after being closed for weeks. The local business had its grand opening just a couple months before restaurants were forced to close to dine-in patrons. 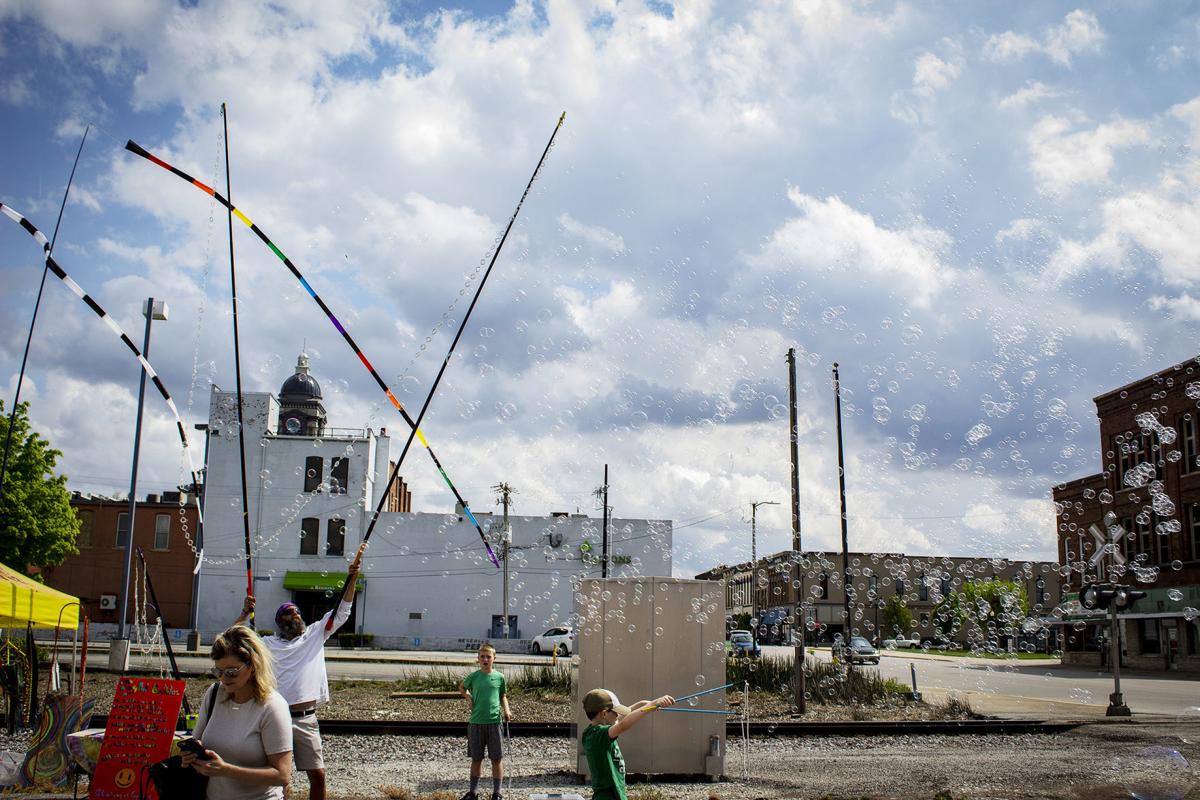 Known as the “Bubble Man,” Don Black brought his show to Slabby’s on the Saturday of the local restaurant’s re-opening weekend.

Joseph Bookwalter, the owner of Slabby’s Food and Freedom, re-opened his restaurant on May 14 after being closed for weeks. The local business had its grand opening just a couple months before restaurants were forced to close to dine-in patrons.

Known as the “Bubble Man,” Don Black brought his show to Slabby’s on the Saturday of the local restaurant’s re-opening weekend.

Starting a new restaurant is difficult business in normal circumstances. According to a study conducted by Ohio State University, 60 percent of restaurants do not make it past their first year, and 80 percent close within five years of their grand opening. Add to that a global pandemic and weeks of closure due to restrictions designed to slow its spread, and the work of establishing a new restaurant becomes that much more difficult.

One of the new local businesses attempting to beat the long odds is Slabby’s Food & Freedom at 307 N. Main St. in Frankfort. Known for its smoked meats and unique variety of homemade sauces, Slabby’s first opened its doors to customers on Jan. 9 and was focused on its mission of becoming known as the place to get barbecue in the region when restaurants were forced to close their doors to dine-in customers in mid-March.

Open 11 a.m. to 10 p.m. Thursday through Saturday each week, Slabby’s may have been just nimble enough to survive being closed for weeks before re-opening on May 14.

“I do most of the work myself now since I didn’t have (much) staff, and they have other jobs, so they were able to continue to work,” said owner and chef Joseph Bookwalter. “I wanted people to come in. I didn’t want to open to carryout only.

“You hope for the best and control the controllables,” he added. “There are a lot of things out of my control. As frustrating as that is, there is just nothing I can do about it.”

So, Bookwalter spent the closed weeks coming up with ways to improve his restaurant.

“We came out with salads, which is something I was working on. We streamlined some practices within the restaurant,” he said. “You just use the time as productively as you can because that is all you can really do.”

Bookwalter said that the community response has been very positive since reopening Slabby’s on May 14.

“We had a huge turnout,” he said. “People understand that people work very hard in these restaurants. And not just restaurants. Other businesses in town are suffering just as much if not more. It is a challenging situation for everybody, but you do what you can do to open back up. But the reception has been fantastic. People need their Slabby’s barbeque.”

To help lighten the mood during the stay-at-home order, Bookwalter invited an old friend from high school to Frankfort. Known as the “Bubble Man,” Don Black set up in the parking lot beside Slabby’s on May 16 to create a giant show of bubbles.”

“We went to Danville High School together in Illinois, and he has made a living since as the Bubble Man,” Bookwalter said. “It is hard to be mad when bubbles are in the air. I thought we needed to bring something in for a day to give people something to be happy about. Most of his summer has been canceled, even into September, and he needs business too.”

Bookwalter also used the time away to bolster the content of the Slabby’s Food & Freedom Facebook page where he posted a series of videos taking viewers through the process of making a City Ham.

“I feel like I can be a TV personality, so I am doing live videos,” he said. “It is a great educational tool for people who want to learn, so I am doing videos, and I think it will lead to something bigger and better.”

Bookwalter also said that he plans to start selling packaged and frozen smoked meats out of Slabby’s.

One of many stories of small-business survival, Bookwalter says that Slabby’s Food & Freedom is set to continue toward its goal of being the spot for smoked meats.

“We are in position to keep marching like we were before the virus,” Bookwalter said. “Sales are increasing fairly steadily. We truly appreciate this community. We appreciate the community support. We obviously could not continue to be in business without it.

“One of our customers looks at supporting local business this way,” he continued. “Think about a business that you love and care for, and then think about it possibly closing. If they have the possibility of closing, then go out and support it … We are very grateful for people who love Slabby’s barbecue.”

You can see Bookwalter’s posts and videos on the Slabby’s Food and Freedom Facebook page.