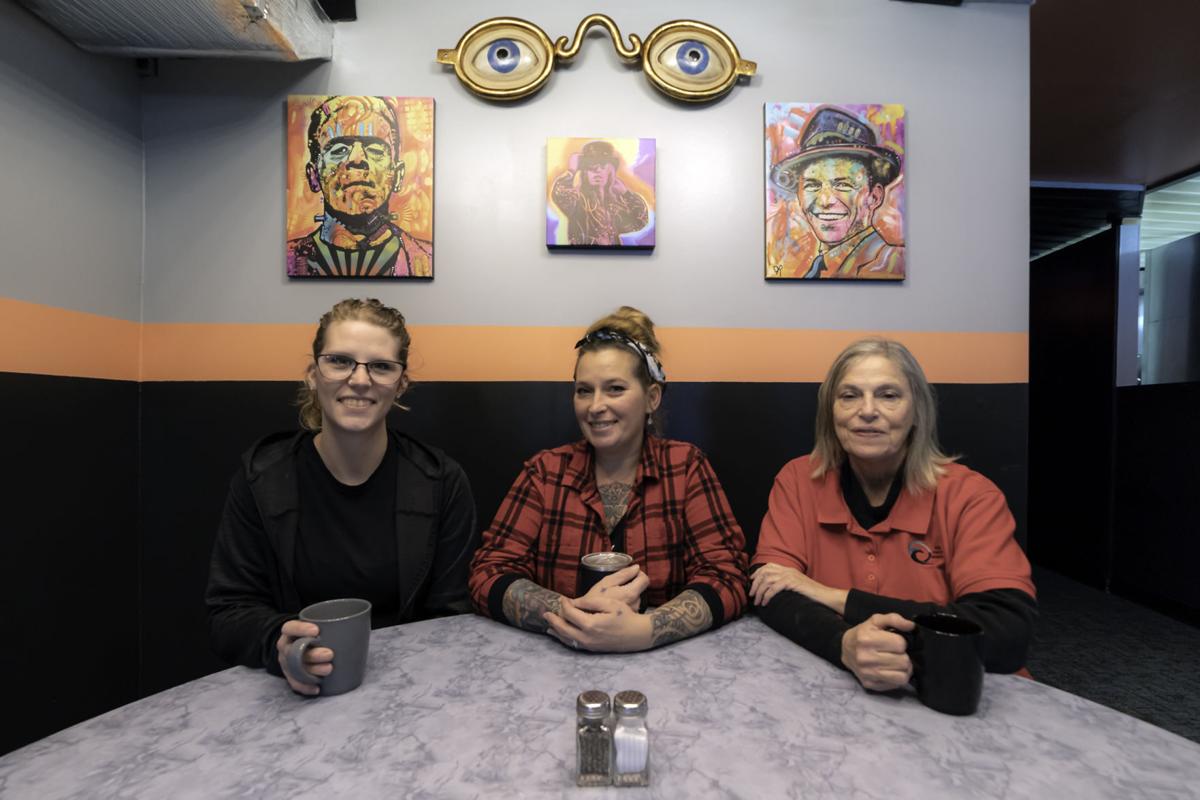 From left, Brooke Denham, Jamie Rhine-Burton and Kay Rhine celebrated the grand-opening of The Vintage Café on Friday at 12 McKinley Ave. in Frankfort. 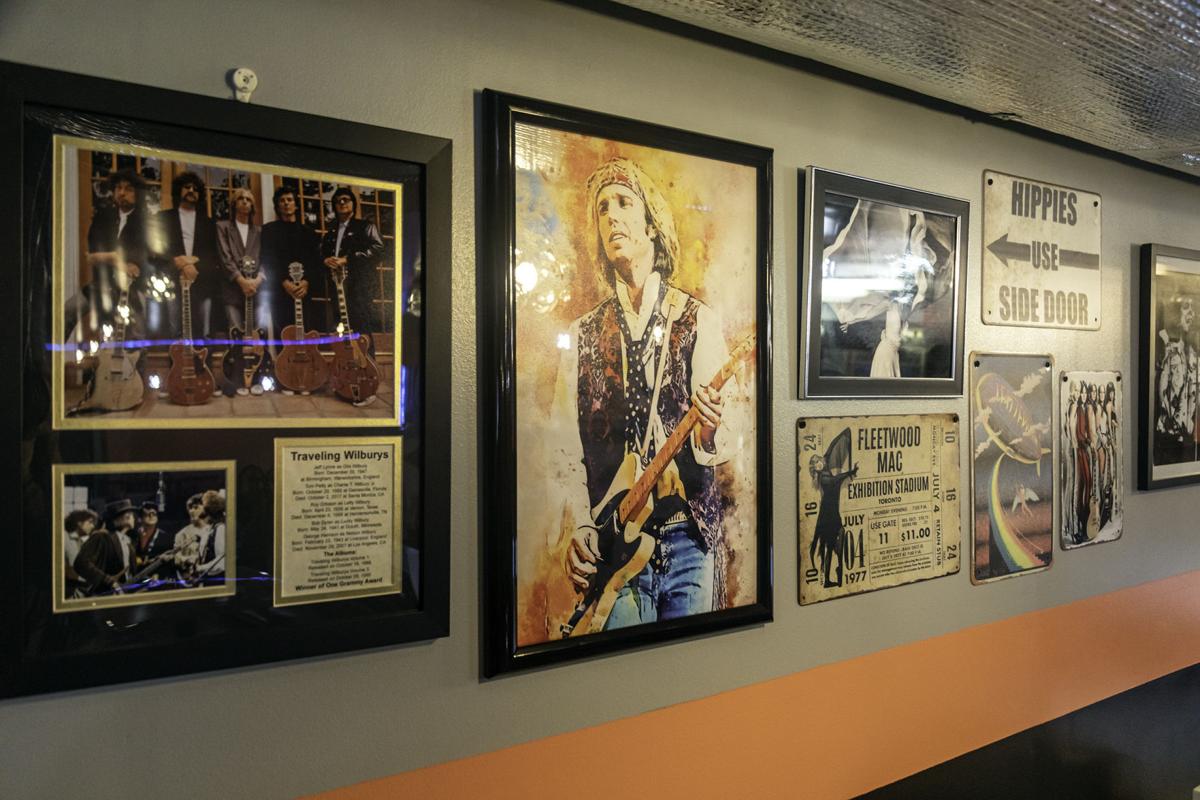 The walls of The Vintage Café are covered with photos and memorabilia of musicians and actors from the 60s, 70s and 80s. 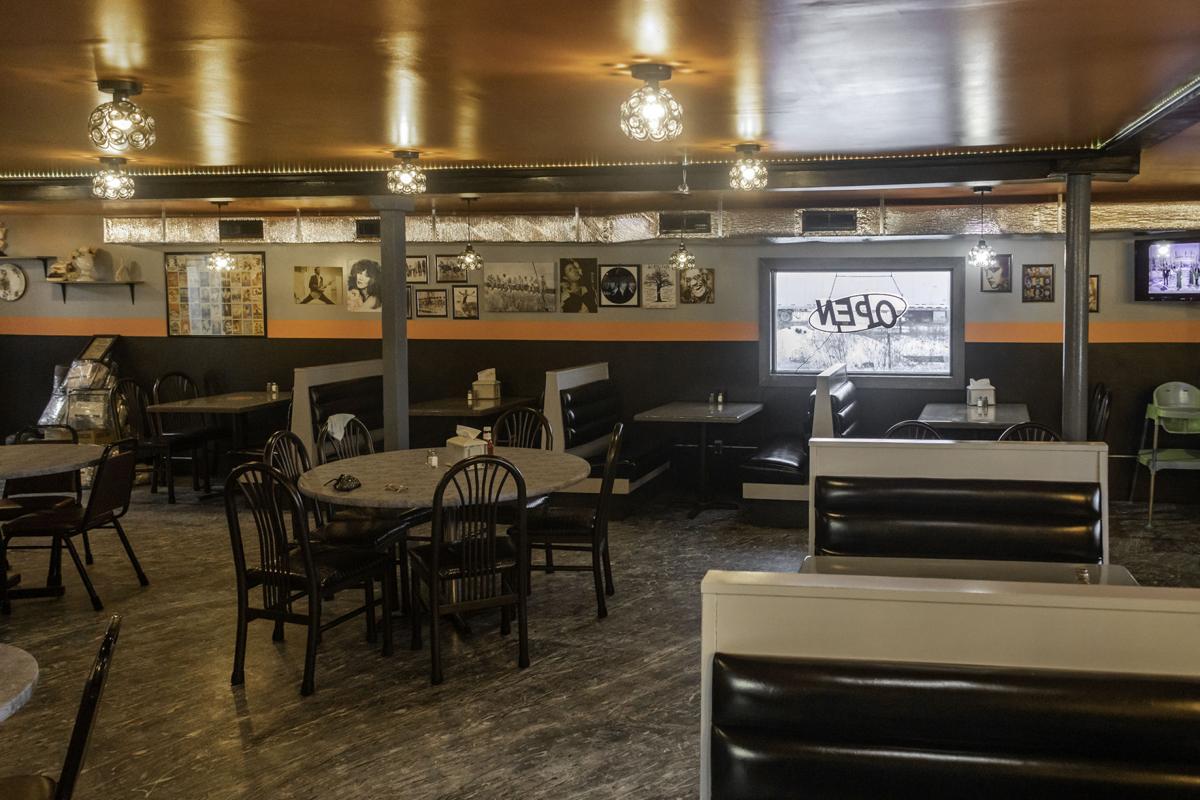 Extra dining space was created by removing a large bar from what had previously been a bar and grill at 12 McKinley Ave.

From left, Brooke Denham, Jamie Rhine-Burton and Kay Rhine celebrated the grand-opening of The Vintage Café on Friday at 12 McKinley Ave. in Frankfort.

The walls of The Vintage Café are covered with photos and memorabilia of musicians and actors from the 60s, 70s and 80s.

Extra dining space was created by removing a large bar from what had previously been a bar and grill at 12 McKinley Ave.

The Vintage Café celebrated its Grand Opening on Friday at 12 McKinley Ave., and its three owner-operators are happy to see patrons enjoying Frankfort’s newest restaurant.

For years, Jamie Rhine-Burton had dreamed of opening The Vintage Café, but it wasn’t until the summer of 2020 that she got her mother, Kay Rhine, and best friend, Brooke Denham, on board to make it a reality.

“My dad (Terry “Dale” Rhine) had passed away (in July, 2012) and left my brother and I some money,” Rhine-Burton said. “So, I thought why not open a restaurant with it. So, my mom and I and my friend, Brooke, opened this up.

“And he (dad) had always wanted to open a restaurant,” she added. “His picture is going up on the wall eventually.”

Tuesday was the first day that The Vintage Café opened its doors to the public, and the crew experienced its first real lunch rush on Thursday.

“We are still figuring it out,” Rhine-Burton said. “But (the customers) have been very supportive. They have said that the food is great, and they are leaving good reviews on the Facebook page.”

“They love the décor,” Rhine added. “They can’t get over the change from what it was to what it is.”

The Vintage Café is at the former site of Trail’s Hideout and The Hideaway 2 Bar and Grille. Along with her mother and friends, Rhine-Burton signed the lease to the building in July and then got to work renovating its interior.

“We were just looking for the right place,” Rhine said.

“I chose here because of the parking,” Rhine-Burton said. “There is no basement. There is a walk-in cooler. I thought this would be a better option. It really is a good location.”

Rhine-Burton and Denham met each other while serving at a local restaurant, and both wanted to put their restaurant and service experience to work at their own restaurant.

“Jamie and I have been talking about it for the last two years,” Denham said. “Then she talked to her mom, and around July she jumped on board. We came and talked to the owner and started it in August. It has been a long process.”

“We took everything down to the studs,” Rhine-Burton said.

When they were finished, the bar and lattice were removed, and they had an open, bright restaurant space with a vintage décor featuring musicians of the 60s and 70s.

“We went with vintage musicians, actresses and actors,” Rhine-Burton said. “I am a music lover, personally. Everything on the wall is right up my alley. We wanted to be classy yet not formal. We want you to feel welcome and have plenty to look at while you are sitting and waiting.

“Food-wise, we have a fresh variety of home-cooked options,” she added. “We do a lot of things in-house. We have a variety of funky sandwiches. I wanted something that nobody else had to offer.”

“The slaw is homemade, the Coney sauce, the potato salad – everything that can be homemade is homemade,” Rhine said.

“I want our coffee to be the best coffee in town,” Rhine added.

“I think the most important things for a restaurant are good food, a friendly atmosphere, and people not waiting forever on their food,” Denham said.

“We are not fast food by any means,” Rhine-Burton said. “There are some salads that have a lot of things on it. So, it takes a minute to layer a salad and make it look pretty.”

Rhine-Burton says that the main reason to come check out The Vintage Café is “because there is no place in Frankfort like it.”

“We are not a box restaurant,” Rhine said. “We don’t take things out of a box and put it on a plate. Probably 70 percent of the food is prepared. It is fresh. And the décor is like nothing in town.”

“I hope people are patient and understanding that we are a new business,” Rhine-Burton added. “Everybody is new, and nobody knows the menu by heart (yet). They have to learn what goes with what and what comes with what.

“And I hope that COVID doesn’t make everybody shut down because then all we could do is delivery or carryout,” she continued.

“Which we would do,” Rhine said.

The Vintage Café, which is open 6 a.m. to 2 p.m. seven days a week, currently has carryout and curbside options available to those who call-in their orders at 765-601-4104.

“We do have a to-go window,” Rhine-Burton said. “That way, if people don’t want to come all the way in, like if we are busy, we can bring it to the to-go window.”

“We will even take it out to their car,” Rhine added.

Denham says the experience of starting a new restaurant has brought with it a range of emotions.

“Exciting, happy, tiring, worrisome – but, overall, I am happy and blessed, especially to do it with Kay and Jamie,” she said. “I just really want it to succeed. That is the main goal, and I am glad to do it with them.”