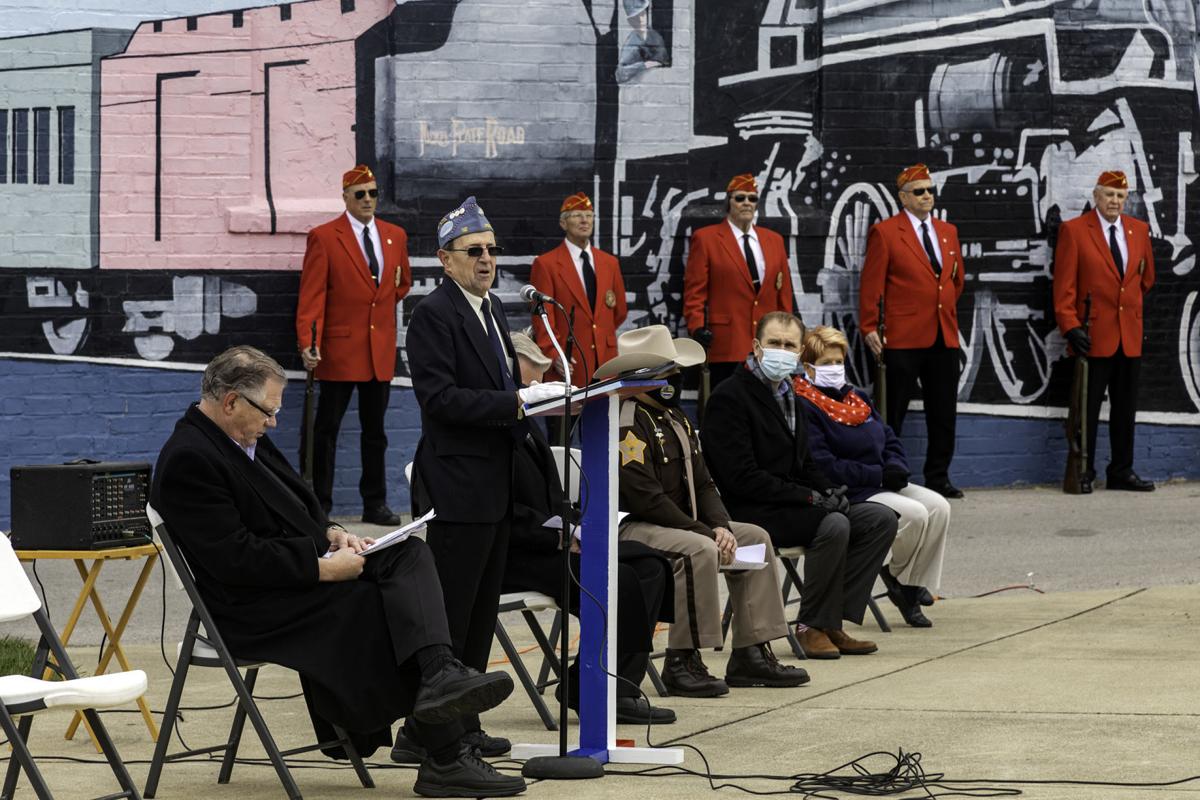 Millard See of the Sons of the American Legion Squadron 12 speaks during Wednesday ceremony at Veterans Park. 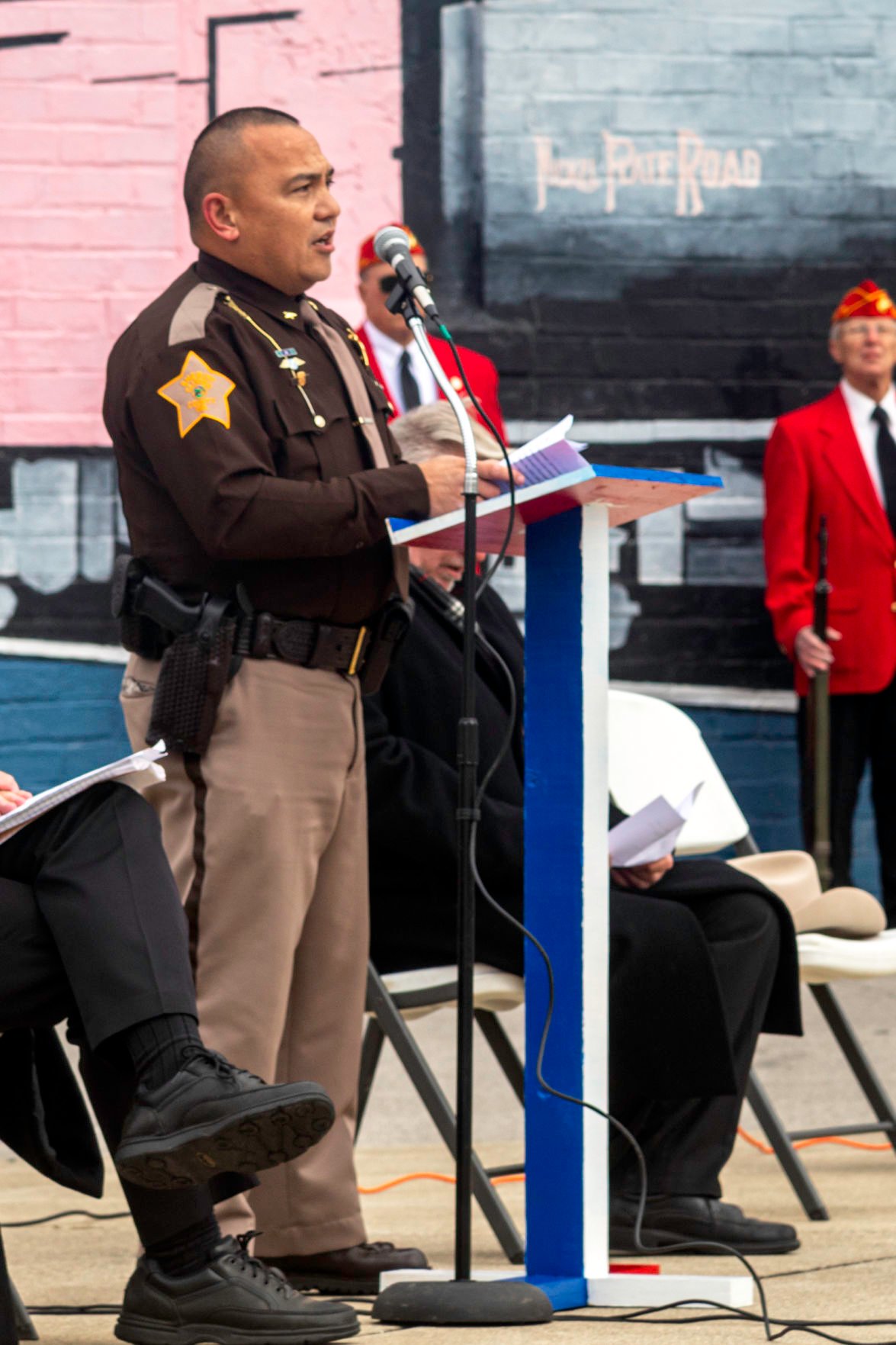 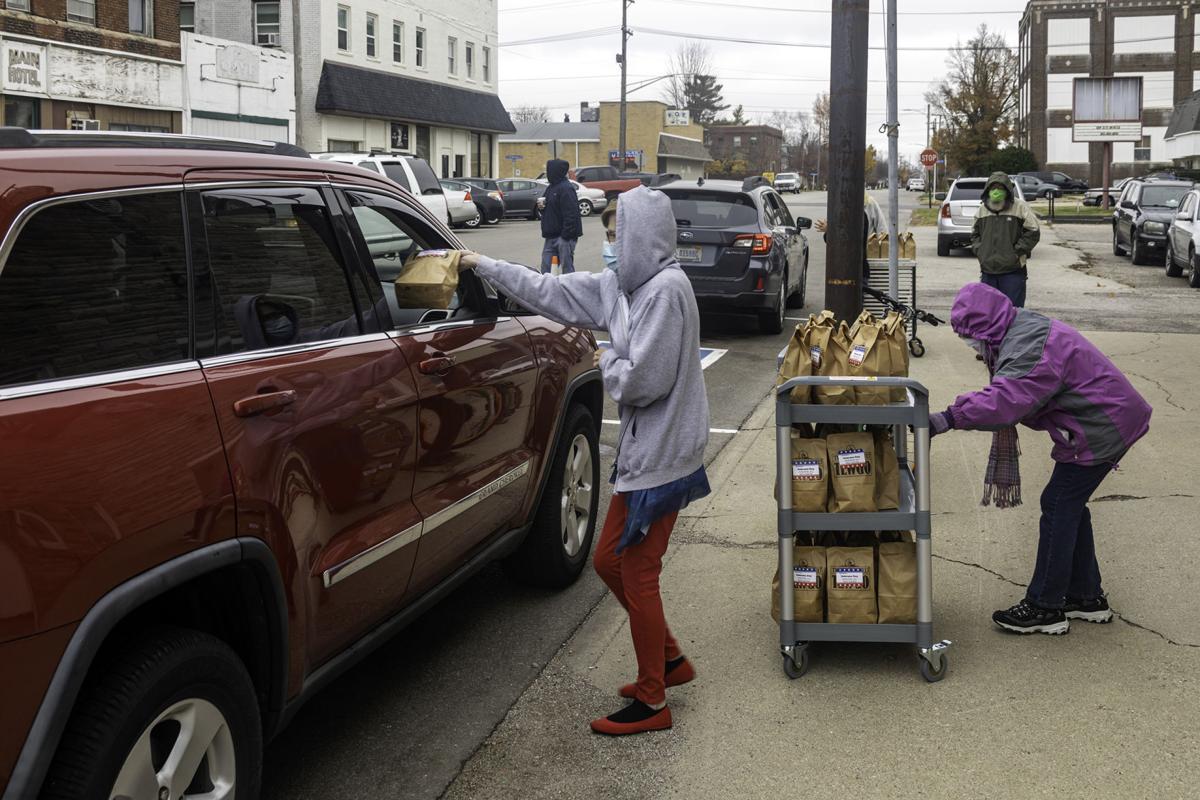 From left, Kathy Shelley and Carrie Ledman were among the members of the VFW Auxiliary who served bag lunches after the ceremony in front of Post #1110 in Frankfort.

Millard See of the Sons of the American Legion Squadron 12 speaks during Wednesday ceremony at Veterans Park.

From left, Kathy Shelley and Carrie Ledman were among the members of the VFW Auxiliary who served bag lunches after the ceremony in front of Post #1110 in Frankfort.

A crowd came out to celebrate in the suddenly chilly weather Wednesday morning during the annual Veterans Day Ceremony at Veterans Park in downtown Frankfort.

Russ Kasper, the Master of Ceremonies, welcomed the crowd and, after Shan Sheridan gave the invocation, Jacque Clements sang the National Anthem, and Opal Bower of American Legion Auxiliary Unit 12 led the Pledge of Allegiance. After the traditional decorating of the mound with wreaths of flowers, Millard See of the Sons of the American Legion Squadron 12 recited a poem titled “I Speak for a Veteran,” which reads as follows:

“Yes, I am a veteran, I could be coaching you son’s little league team

Or I might be driving that fire truck as you hear the sirens scream.

I may be on of the dignitaries as we place flowers on the mound.

But you know, my buddy won’t be here, his body is yet to be found.

Yes, I am a veteran; I stand ready to fire the 21 gun salute.

OR I could be a volunteer at the armory teaching a new recruit.

I’m right here, living in the community, everyone knows who I am.

My name could be Bob, or Ralph or James, even Mary or good ole’ Sam.

I might be a local doctor or nurse, tending to your medical needs.

Or perhaps that policeman, monitoring your excessive speeds.

I might be standing at the wall, or sitting next to you there in the crowd.

But, my buddy can’t be here. He came home covered in a shroud.

We were proud to have fought for our country, to protect ‘Old Glory’.

Let me tell you about my buddy. It’s not a pleasant story.

We carried him through smoke and fire. Then he died there, in our laps.

There is some way we must honor him, fire the rifles then play ‘Taps’.

No, I’m not a veteran, yet I stand here today, to sing our National Anthem, to hear the minister pray.

Then I’ll listen to the speakers, as they relate battles fought and won.

As they mention the heroic deeds of a father, daughter, uncle or son.

Then, as the program’s over, I’ll take time; turn to a veteran standing near.

Thank him once, thank him twice, and once again, because his buddy can’t be here.

God Bless them all!”

The Veterans Day Address was then given by Clinton County Sheriff Rich Kelly. Before his address, Kelly informed those in attendance that Clinton County had lost on of its Vietnam War Veterans on Oct. 23.

“His name is Thomas Allen Wright,” Kelly said. “He served in the Army. He was like many other soldiers who did. He served 11 months and 25 days in Vietnam. During those 11 months and 25 days, Tommy received the nation’s second highest honor, the Silver Star. He also received a Bronze Star, the Air Combat Medal, Purple Heart, Combat Infantry Badge, Vietnam Service Medal, National Defense Service Medal, Sharpshooter with an M14, Expert Marksmanship with an M16.

“Tommy was one of our heroes, like the real heroes, they don’t brag about what they have done, but he is one of the true heroes of the Vietnam War from Clinton County,” Kelly continued. “Tommy was a quiet man. He did not brag about what he had done. He is loved by a wife, and many good friends.

“This was presented to me by Joe Root, Clinton County Veteran’s Affairs, Veteran’s Service Officer,” Kelly added. “Thank you Joe for bringing that to me, so that I could share that with the rest of our community and our veterans.”

Kelly began his address by telling the crowd that he was humbled and honored to represent the community and to be asked to give the address on Veterans Day.

“In the spring, we have a day of remembrance to take the time to honor those who served, but did not return,” he said. “Today, we humbly show our respect and admiration and give thanks to those who served and came home.

“Many returned changed – changed for the better as boys became men and girls became women, but also changed emotionally, mentally and physically. There are many wounds that our service members bare. Every day, 22 veterans lose their battle to the emotional and mental wounds they carried home from the battle fields. May we always remember the struggles of those returning home. Our own Congressman, Jim Baird, fought and lost his hand in Vietnam. He is a great man and it has been a pleasure to get to know Congressman Baird.

“For over a century, we celebrated this event as Armistice Day. The day that marked the ending of the First World War, the war to end all wars. The day the guns fell silent on the 11th hour of the 11th day of the 11th month.”

At this point in his address, Kelly stopped as the clock struck 11 a.m. and Marine Corps League #967 fired the 21-gun salute and Taps was played.

“From the inception of our great nation, valiant men and women have raised their hands and have been called to duty to protect and defend the freedoms of our country,” Kelly continued. “The hard fought battles in American History such as Bunker Hill, Belleau Wood, San Juan Hill, Saipan, Coral Reef, Kandahar, Korea, Vietnam, WWII, Iraq and Afghanistan will forever be etched in our history. Over 50 million people have donned a uniform of the United States Military. Today, we give thanks to the nearly 20 million who walk amongst us today.

“A few of us have stories in our families of our heroic parents, grandparents, brothers, sisters, cousins, aunts and uncles. My Grandfather – I hold a lot of his personal possessions dear to me – he was buried with the Army Air Corps. He never wanted to change to the United States Air Force, and that is what is on his headstone. He flew in WWII. I am fortunate enough to have a few of his treasured items like his flight log. The last entry, ‘War is Over, We Won! Going home.’ It sends chills down me every time I read it, and I think about what this young man was doing at that time when he wrote that or when he learned the war was over. I know that soldiers keep journals to keep track of what happened and how things went and have those things in their minds forever more. I’m also fortunate to have two nephews, one is a Lieutenant in the United States Marine Corps and the other a Lieutenant in the United States Army and with great appreciation, we need those young men and women in these services to keep our country free and to protect those freedoms that we enjoy every day here in Clinton County and across this country.

“I’m fortunate,” Kelly added. “We are all fortunate to have these folks in our midst and with respect and honor to each and every one of them. With that, I appreciate the opportunity to come up here and present a speech and to show gratitude and be thankful for everything that has been provided to this country by you, the veterans of our United States of America, and with that, I thank you.”

Shan Sheridan gave the benediction to finalize the ceremony.

After the ceremony ended, VFW Post 1110 continued its tradition of providing a meal – this time via drive-through service – and dinner was served to veterans plus one guest each at American Legion Post #12.