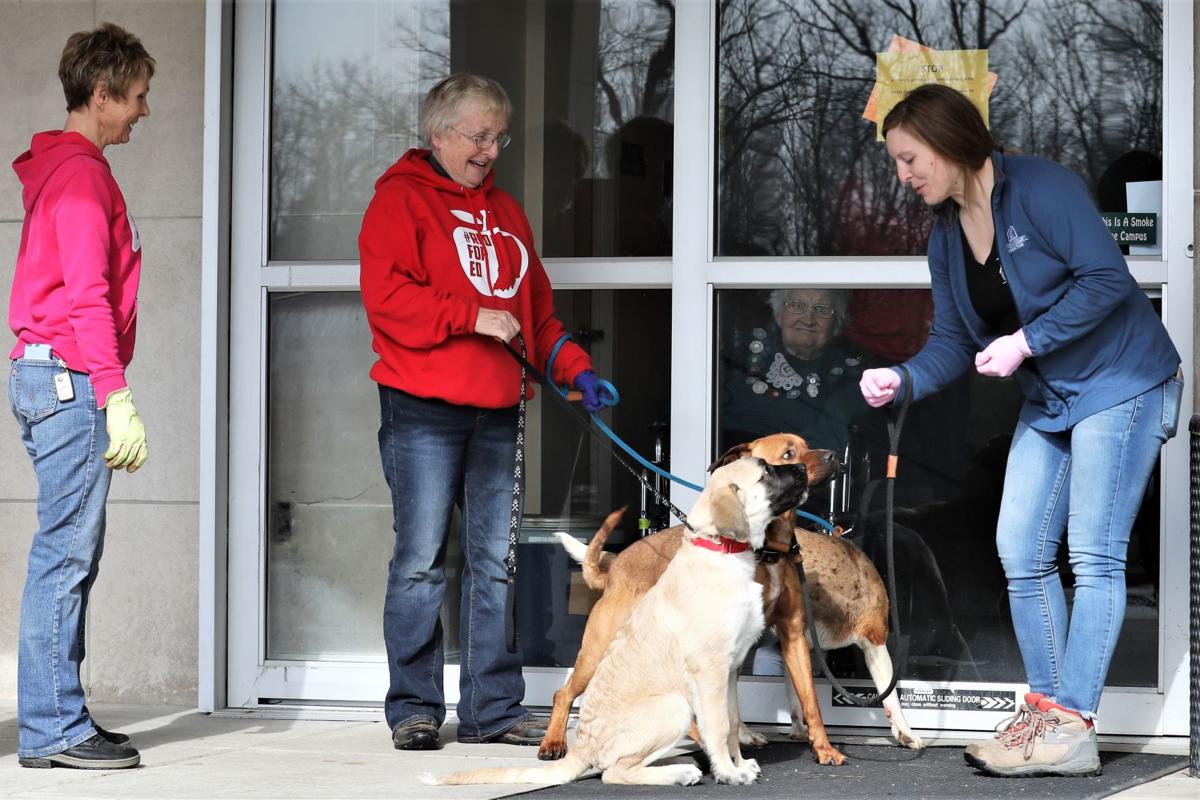 From left, the Humane Society of Clinton County’s Cindi Davis, Nancy Elsea and Camille Czupka brought dogs for residents to see in the courtyard and through the windows of Wesley Manor on Wednesday in Frankfort. 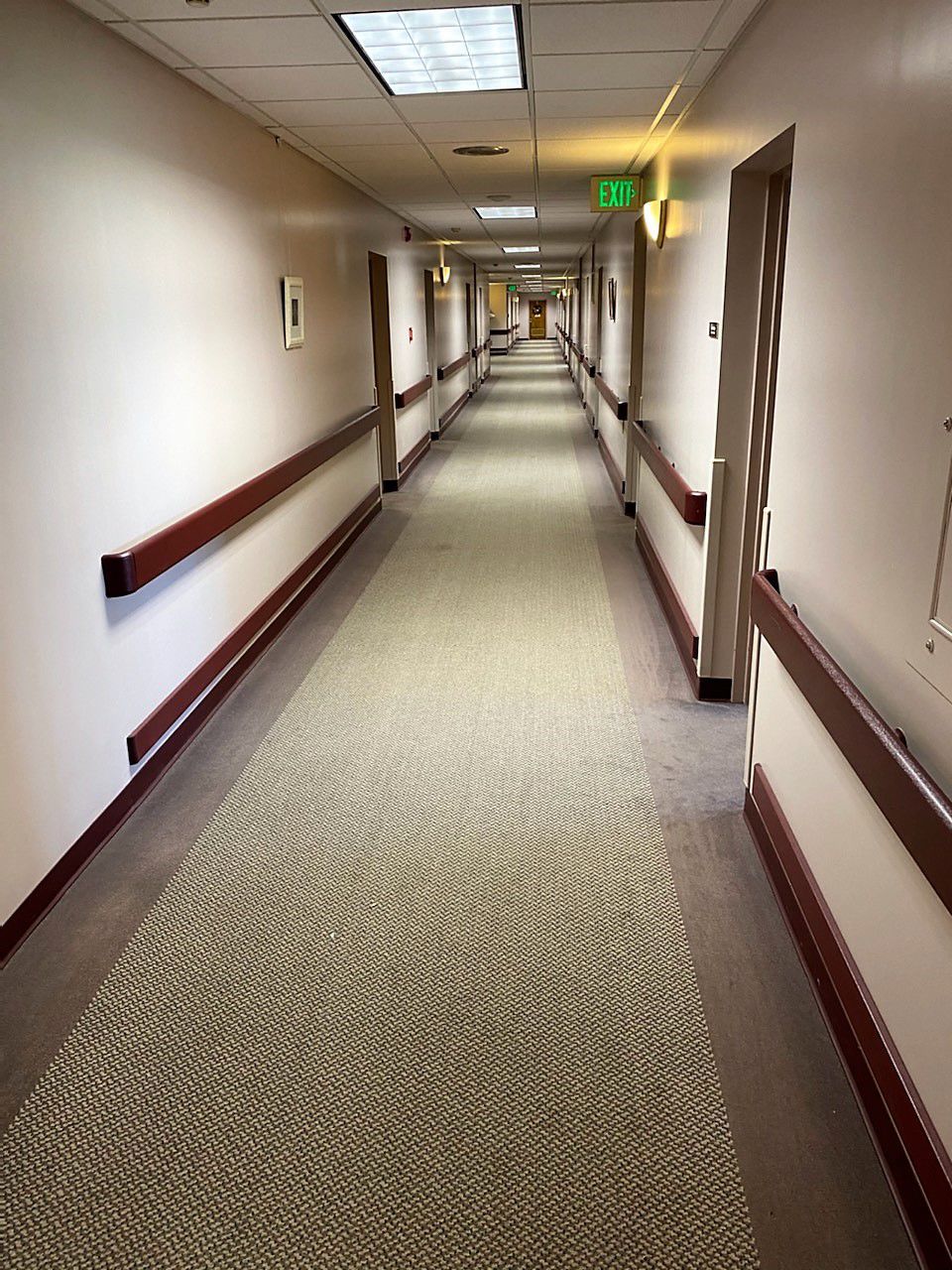 An empty hallway inside Wesley Manor in Frankfort.

From left, the Humane Society of Clinton County’s Cindi Davis, Nancy Elsea and Camille Czupka brought dogs for residents to see in the courtyard and through the windows of Wesley Manor on Wednesday in Frankfort.

An empty hallway inside Wesley Manor in Frankfort.

To say that Fred Taylor is a decorated U.S. Army veteran would be an understatement.

Taylor is a three-time Purple Heart recipient who served with the First Cavalry Division (Airmobile). During his service to his country he earned a Combat Infantryman Badge, a Cross of Gallantry, the Air Medal, a National Defense Service Medal, a Vietnam Service Medal and a Vietnamese Campaign Medal.

Now, as the executive director of Wesley Manor Retirement Community in Frankfort, Taylor’s new mission is to keep the novel coronavirus (COVID-19) from invading one of the community’s most vulnerable populations.

“It is worth it to put people through the suffering of lack of community (so that we don’t) let the virus get a foothold here and maybe even lose some people,” Taylor said. “We are doing everything we can. We are encouraging. But we can’t let them in … we are going to protect our people. It’s not popular but, if we save lives, I don’t care.

“Right now, the governor and the CDC said the next two weeks are going to be real critical in the United States to see if we can stem the growth and flatten out that line,” he added. “So, we are being very aggressive here. We are on the offensive and not the defensive. We are being proactive and not reactive. It is critical that we are on the offense as much as we can … We are on a battlefield right now. And we are waiting for the enemy. We know it is there and the enemy is coming. And the enemy is the COVID virus.”

Taylor says the residents of Wesley Manor are obviously missing contact. Sometimes, families come to wave to their loved ones through a window while speaking through phones.

“That is one of the most difficult things we have right now,” he said. “People are starting to get stir crazy. Because of that, they are starting to get creative with how they communicate. People are made to be social. It is a change for us on part of the people we serve. We are not being cruel. We are trying to save people’s lives.”

Taylor says his staff is working hard to keep morale up.

“It is difficult, but we are very fortunate to have an internal television station,” Taylor said. “Everywhere in this building we have TV monitors. During the day, we have exercises, announcements, and we have church services on Sundays. We have all kinds of people coming on making announcements because we want them to be informed.

Taylor says the staff at Wesley Manor never wavered when the restrictions were put in place.

“The staff never doubted it,” he said. “They said, ‘Let’s get ready for it right now,’ and that is very impressive. It is the emotional challenge. Physically, we will handle anything. But for me and leaders in my position, the issue is ‘What am I not thinking of?’

“I am an ex-military guy,” Taylor continued. “The question we ask is ‘What if plan A, B or C doesn’t work?’ I have never dealt with anything like this. I am seeking the answers to ‘What if?’ I am reading everything from the Indiana Department of Health and the CDC. My company (BHI Senior Living) has done a magnificent job. We meet seven days a week on the phone. On this conference call, we are all asking questions and then we find the answers.”

“Certainly not expected by any means,” Witty said. “I think there is a lot in life we take for granted. Many people have not experienced something like this, so their anxiety level is up considerably.

“This is a very loving community and there are a lot of friends,” he continued. “That now, should not, cannot happen. I was just going down the hall and a lady passed me in her wheelchair. She reached out her arms to give me a hug because we haven’t seen each other in weeks. I backed away and said, ‘No, I shouldn’t do that.’ She was then reminded that was the case. So, I think the entire staff here at the Manor at all levels has been very caring and yet firm in what the expectations are and how to carry that out from the top to the bottom. There has been good communication about what is going on. We all do have TVs, of course, in our apartments and rooms. Sometimes you don’t want to watch all that stuff, but it is also helpful. Information is helpful. You want to know what is going on.”

Witty added that he believes all of us are realizing that we can do these things we never dreamed we would have to be doing.

“It is very restricting to what our normal life is,” Witty said. “But I think most people have an attitude that we are going to get through this no matter what. So, we do it together. That is the only way it is going to happen.”